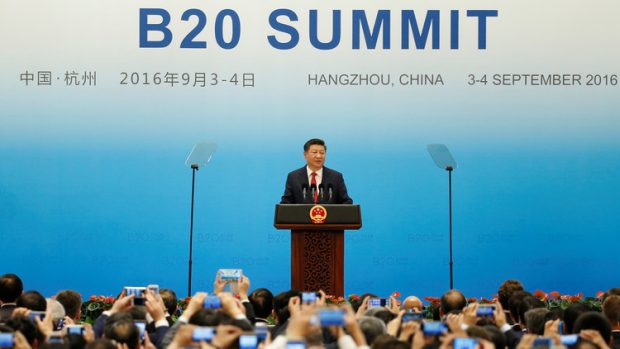 World leaders are meeting in China at the G20 summit to discuss policies to bolster the world economy. They are at an opening ceremony for the annual economic summit, which is being hosted in China for the first time.

China’s president Xi Jinping opened the event by emphasising the need for the world’s 20 largest economies to safeguard economic growth. Also up for discussion are the global steel crisis, the UK’s Brexit talks and tax of multinationals like Apple.

Ahead of the meeting, the International Monetary Fund (IMF) warned it was likely to downgrade its forecast for global economic growth again this year.

The IMF has already reduced its global outlook after the Brexit vote, cutting forecasts for world GDP growth to 3.1% for 2016 and 3.4% for 2017.

In opening remarks, the Chinese president said the world economy was recovering but faced multiple challenges in finance, trade and investment.

Hosted in the Chinese city of Hangzhou, it is the final G20 summit for US President Barack Obama and the first for British Prime Minister Theresa May.

At a joint press conference, President Obama said the first task for Britain following the EU referendum was to “figure out what Brexit means with respect to Europe”.

He added that the US would prioritise its trade talks with the EU – known as the Transatlantic Trade and Investment Partnership (TTIP) – ahead of talks with the UK.

She also defended her surprise delay in making a decision on the £18bn Hinkley Point nuclear power project, saying she would “look at the evidence and consider it properly”.

“I’ve been very clear that I will be doing that and will be taking a decision sometime this month,” she added.

The Prime Minister is due to discuss the project with China’s leaders amid heightened diplomatic tensions over her perceived concerns about Chinese involvement in Hinkley Point.

China’s continued production of cheap steel was also an issue on the opening day of the G20 Summit.

European Commission President Jean-Claude Juncker said China must address its problem of industrial overcapacity, saying it was “unacceptable” the European steel industry had lost so many jobs in recent years. “Overcapacity is a global problem but there is a particular Chinese element,” Mr Juncker said.

He also defended the EU commission’s decision to hit tech giant Apple with a €13bn (£11bn) bill for unpaid taxes, saying it was not aimed at the US. “We are basing our decisions on facts and on the legislation,” Mr Juncker said. “This is not a decision against the United States of America.”