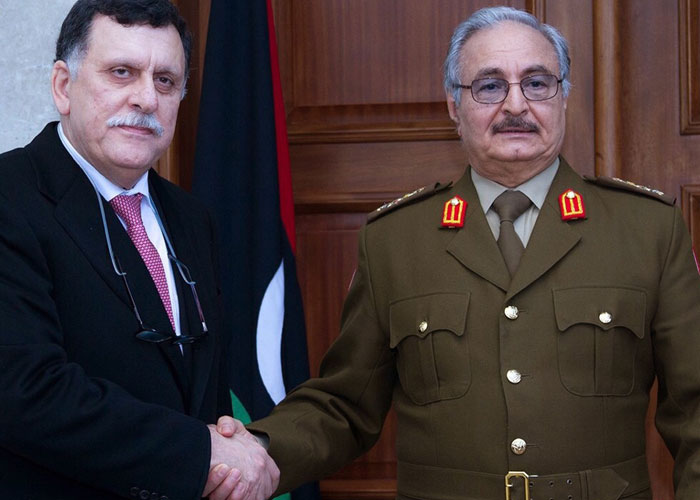 The leader of the eastern forces of Operation Dignity, which is an operation appointed by the Tobruk-based House of Representatives (HoR), Khalifa Haftar, refused to meet the Government of National Accord’s Prime Minister, Fayez Al-Sirraj, in Cairo, Egypt.

The meeting, according to Egyptian sources, was scheduled to be held on Tuesday morning, however, Haftar seems to have refused to meet with Al-Serraj and the meeting was delayed.

The sources added that Haftar rejected to meet Al-Sirraj after he finished his prolonged discussions with the Egyptian Chief of Staff, Mahmoud Hijazi.

Egypt is trying to gather all the Libyan factions on one table for dialogue and a peceful solution to the crisis.

To that end, the HoR’s Speaker, Agilah Saleh and several MPs are expected to arrive in Cairo today in an attempt to amend the UN-brokered GNA and make it more inclusive.

Reportedly, the Head of the Presidential Council of the UN-brokered Government of National Accord, Fayez Al-Serraj, was going to propose an initiative for forming a mini-government as part of a transitional phase, aiming at getting Libya out of its current political impasse.

According to the sources, who spoke on condition of anonymity, Al-Serraj was going to announce his initiative after meeting Haftar and would then propose that the suggested mini-government would have a unified military council headed by the eastern commander of Operation Dignity, Khalifa Haftar, in cooperation with military officers from all across Libya.