Khalifa Haftar: Is he still the strongest man in Libya? 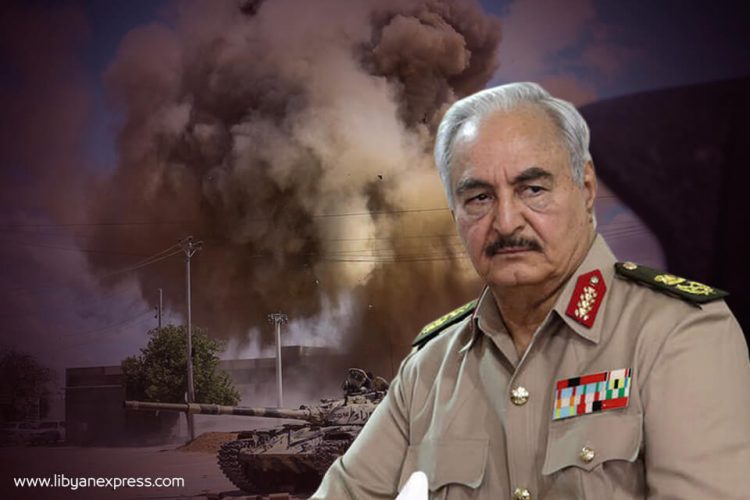 All the newspaper writes about:” The military strongman leading the offense against Libya’s UN-backed government”, “Khalifa Haftar, Libya’s strongest warlord, makes a push for Tripoli” and “The Libyan crisis: did he sell Who is strongman Khalifa Haftar?”.

We must know who this man is, who they say is the strongest man? An ex-General who came back to Libya from the United States just in time (in 2011, just after the beginning of the political turmoils), the dictator made him a commanding officer in the 1980s, but Haftar soon turned against his own leader, calling for a coup and eventually having to be rescued by the CIA. Then lived in the U.S. for 20 years, has past links with the CIA he gained U.S. citizenship before returning to his homeland just before Gadhafi. When Muammar Gaddafi’s fell in 2011, he controls eastern Libya, has never disguised his ambitions, Haftar returned from exile in the US, to be the next president, he became commander of Dignity Operation in Benghazi and the military officer who is supported by the Interim Government and the eastern parliament in Libya. He never agreed to recognize Al-Sirraj and his Skhirat-signed UN-brokered government as a legitimate body.

He wants to take the power the same as Sisi in Egypt outshout elections through loyalist to Haftar’s they issued statements and held demonstrations in Benghazi and other cities calling for mandating him as the ruler of Libya, this give him power outside Libya to make him strong man. The Haftar’s loyalist demanding an end to the elections’ preparations saying

We only need Haftar as the president here in east Libya, we don’t need elections or anything like that.

Who makes him the most powerful man in Libya?

Haftar has long worked hand-in-glove with the UAE and Egypt to brings with it the framework of the intra-Gulf dispute with Qatar, which is known to back many of the western militias, It also Saudi support unlocks a sizeable war chest and an important channel of influence to the Trump administration in the Middle East.

The Great Powers of the Middle East A plan to control the Libyan region initially put control of Benghazi and then the capital of Tripoli. Therefore, Haftar  had a limited window to convert his recent advance in the south-west of the country into a meaningful victory he sent forces into strategic locations in the south.

Then he launched attack on Tripoli on April 4, after his cakewalk through the south of Libya from his power base in the eastern half of the country. The assault on the capital was his strongman effort to bring all of Libya under his control and vanquish the country’s “terrorist” gangs. But his goal is to eliminate Al-Sirraj and his Skhirat-signed UN-brokered government.

He claimed to be purging the south of terrorists and mercenaries from sub-Saharan Africa, despite the scores of Chadian and Darfuri guns-for-hires within the LNA’s own ranks that address its abiding manpower shortage.

Libyans, who endured decades of Gaddafi’s rule followed by the bloodshed and turmoil after his overthrow by rebels with Nato support, now face a new chapter of suffering, the cost of his ambitions is becoming clearer more than 260 have already died, including civilians, and many more are wounded. Around 32,000 people have been displaced.

As  we know US policy encourages the fighting against extremism and terrorism; however, this time US against Haftar,   Haftar did not get the message right as its Secretary of State Mike Pompeo has already spoken against Haftar’s operation in Tripoli, Trump’s speech saying his forces must cease fire and return to their status quo positions. But he got his support from Middle East countries.

On the other hand, he got support by two ways he controlled Libyan media and used it for his purposes by  a formidable electronic army, which has artfully combined misinformation with selected facts to amplify and exaggerate the LNA’s influence in parts of the south-west, and creating new facts on the ground that are temporary and reversible.

Which makes Libyans wonder what does the West and the East want from Libya? Do the West pro-democracy or not? they say speech’s without actions they are siding with a military man trying to grab power through war and destruction in the name of fighting terrorists. To them, these terrorists seem to be the same group the US, France, UAE, Saudi Arabia, Egypt and Bahrain is backing as the internationally recognized government of national accord in Libya. The danger, of course, is that Haftar himself came to believe the mythmaking of his media machine and he will be the next president.

This fluctuation cannot be Washington’s stance as it has helped embolden Haftar and his backers to wage an all-out war that could last for months and lead for thousands of casualties; therefore, no hope for democracy and rule for the fittest.

In view of all these factors, will the old man stand up to remain the strongest man in Libya, although in the beginning America supported him and now, they trying to give him up.

War in Tripoli with no doubt would leave a massive split in the fabric of the society.

For: Khalifa Haftar: Is he still the strongest man in Libya?