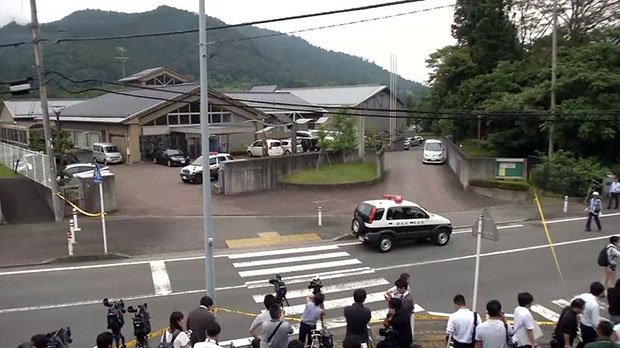 Nineteen residents have been killed in a knife attack at a care centre for people with mental disabilities in the Japanese city of Sagamihara.

Such attacks are extremely rare in Japan – the incident is the worst mass killing in decades.

Police have arrested a man who worked at the centre until February, and who turned himself into police after the attack.

He reportedly said he wanted people with disabilities to “disappear”.

The brutal killings have shocked Japan, one of the safest countries in the world.

Chief Cabinet Secretary Yoshihide Suga said it was “a very heart-wrenching and shocking incident in which many innocent people became victims”.

The suspect has been named as 26-year-old Satoshi Uematsu.
He sent letters to politicians in February in which he threatened to kill hundreds of disabled people during a night shift, Kyodo news agency reports.

“My goal is a world in which the severely disabled can be euthanised, with their guardians’ consent, if they are unable to live at home and be active in society,” Uematsu wrote in a letter to the speaker of the lower house of parliament, obtained by Kyodo. He was kept in hospital for almost two weeks before being released.

The governor of Kanagawa prefecture, Yuji Koroiwa, has apologised for not acting on warning signs.

For: knife attack by disabilities center worker kills 19 in Japan