Libya Should Revive the 1963 Constitution 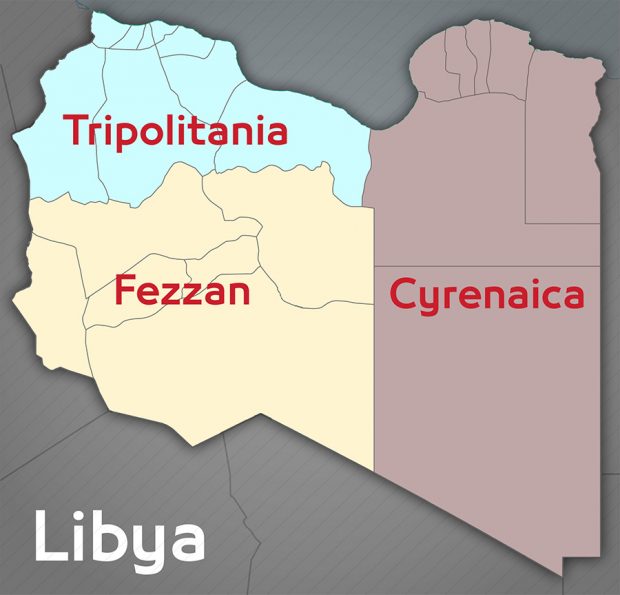 A common theme among many postcolonial countries in the Middle East is the difficulty of placing various religious and ethnic groups under the same state’s flag. Libya is different, as its people are overwhelmingly Sunni Arab. Nevertheless, tribal politics have instilled serious divisions in the country. The friction coalesces around two of the three primary regions of Libya, Cyrenaica in the east and Tripolitania in the west (the third historic province of Libya, Fezzan, is to the south of Tripolitania and tends to align its views with its northern neighbor). While the Qaddafi years represented a period of oppressive centralized control for all factions of Libya, the events since the revolution have caused these long-repressed tensions to bubble to the surface.

In the face of this growing sectionalism, Libyans should urgently adopt a constitution that provides a basic formula for co-existence. The pre-Qaddafi 1963 constitution offers just such formula. Splitting Libya along the traditional Tripolitania/Cyrenaica border would be a viable last resort if the constitutional solution remains elusive.

The Crushing of a Dream

Two crucial events in 2012 set Libya on a path of almost no return. In March 2012, federalist forces and their supporters gathered in what is now called the “the Soap Factory Meeting” in Benghazi to declare their federalist demands and install Zubair Sanusi, a relative of the late King of Libya, as the head of the movement. Just a few months later, Abdul Jawad Badeen, an ex-member of the Libyan Fighting Group, used his forces to block the main coastal highway at Wadi al-Ahmar in protest of the one-man, one-vote electoral method, and demanded that the new constitution drafting committee be elected based on regional considerations. These federalist forces were pressing for a solution that would take into account the views of the three regions as equal, rather than as weighted by population. After all, Tripolitania has a population that is double that of eastern Libya. Given this pressure, the demands of such regionalists were recognized, meaning that Libya’s constitution would be written to give considerable weight to its regions.

A Marriage of Convenience

The divide between east and west became even wider with the new Libyan House of Representatives (HoR), elected in 2014, taking office in the eastern city of Tobruk, instead of Tripoli. In defiance of the U.N.-sponsored political agreement and the international community, the HoR sanctioned the formation of a duplicate central bank, national oil company, and a government based in eastern Libya, or as federalists fondly call it, Cyrenaica. An ex-Libyan military officer and prisoner of war, Khalifa Hifter, led the armed rebellion against western Libya and its institutions. A coalition of eastern tribal forces and a rag-tag army led by Hifter moved against revolutionary forces under the guise of pushing out terrorists and Islamists. The real motive was to ethnically cleanse Cyrenaica from all those with family roots from western Libya.

This marriage of convenience between Hifter and Libya’s eastern tribes became shaky as the long-term objectives began to diverge. The tribes pushed for more autonomy and resources while Hifter, in typical Middle Eastern military fashion, wanted to consolidate power for himself and his family. Both sides have been using each other for different objectives. According to statements by his ex-spokesman, Mohamed Al-Hejazi, and First Lieutenant Faraj Eqaim, Hifter seems to keep the upper hand by purportedly assassinating his foes and turning one tribe against another, or sowing divisions within the same tribe.

To compensate for the lack of fighters, Hifter relied on the Madkhalis to give him religious cover and reduce his dependence on tribal fighters. Madkhalism, an offshoot of Salafi thought, advocates that those in power are to be considered “waliu al-Amr” or one vested with inviolable sanctified authority. Madkhalis have traditionally supported autocratic Middle Eastern regimes including Qaddafi. Military governors were installed in most regions in eastern Libya and some elected officials were removed from local councils. Friday sermons became tightly censored and travel outside eastern Libya required permission from security agencies, all reminiscent of Qaddafi’s oppressive 42-year rule of Libya. Regional autocracies found willing partners from all sides in Libya, including those in the west. Money and military hardware flowed in despite international sanctions. Hifter, in particular, managed to align himself with Egypt’s Sisi, the U.A.E., and recently with Russia.

Some would justifiably say that the failure of the Constitutional Drafting Assembly (C.D.A.), established in April 2014, to produce a viable constitution was the straw that broke the camel’s back. Infighting, divisions along tribal and regional lines, corruption, and legal violations plagued the C.D.A. Keeping with federalist demands, regions that contained two-thirds of Libya’s population formed only one-third of the members of the C.D.A. The Amazigh minority boycotted the C.D.A. altogether. The Cyrenaica representatives maneuvered tirelessly to produce a constitutional draft that would offer them control over the political and economic institutions, based on “regional allocations” including governmental positions. The national interest was simply ignored. Three years later, no draft constitution was produced. Instead, two inadequate versions were presented by competing factions inside the C.D.A. Sectionalism and inequality were codified in the pro-Cyrenaica version, including enshrining the one-man, four-vote benefiting those in eastern tribal regions. The constitutional crisis continues with no light at the end of the tunnel.

The 1963 Constitution, More than an Olive Branch

Libyans will have no choice but to soon make some hard decisions. One such option is returning to the region-conscious 1963 constitution. An earlier constitution in 1951 had granted a great deal of authority to the regions. However, this version was drafted before the exploitation of the country’s oil reserves.

After all, many of the changes that the 1963 constitution introduced were to limit the authority of the regions in favor of expanding the rights of the people. Most obviously, the 1963 amendments removed allusions to the three nations that made up Libya. That said, the country’s divided nature was still reflected in the updated provinces of the country, increased in number so as to limit the ability of a few strong actors to gain power in each region. Considering the vast differences in population, it offers protections to the east without being unfair to those in the west. With minimal revisions, the references to monarchy could be replaced with a presidential or a parliamentary system. Once a transitional period of a few years has passed, Libyans will be free to permanently adopt this updated constitution or to look for a new one.

The return to the 1963 constitution is gaining momentum in Libya, with several movements, ranging from royalists to pro-democracy activists, calling for an adoption of the constitution.

Separation if All Else Fails

Failure to find a formula that brings together east and west, such as the 1963 constitution, could result in the country being divided in two. A split between Cyrenaica and Tripolitania, in which each state is able to administer its people in an effective manner, would be a much fairer option to the Libyan people than continued discord and chaos.

For this option, the Libyans have two examples to look to. The first of these is the most optimistic. In the 1993 Velvet Divorce, Czechs and Slovaks dissolved the state of Czechoslovakia and formed their own states. Again, arguments about fairness between the two historic regions were raised as the reason for the split—Slovaks complained frequently about the fact that Czech economic and cultural institutions were held in higher esteem and advanced whereas Slovak cultural traits were minimized.

But a more familiar example for eastern Libya is South Sudan. The very tribalism that currently drives the debates in eastern Libya has caused the South Sudanese government to grind to a halt, with sporadic clashes between rival forces. Given the power of the tribes in Cyrenaica, there is significant risk that this would happen if eastern Libya suddenly found itself independent.

Libya’s third region, Fezzan, is likely to choose to remain part of western Libya as its demographics are under threat by the illegal immigration of more non-Libyan Tebu and Tuareg tribes who seek to join “their Libyan distant relatives”, while indigenous Libyans from the region are moving away to the more prosperous and relatively safer north. Without uniting with Tripolitania, these Libyan tribes, families, and communities that once formed a majority in the region may become a minority.

Western Libya suffers from its own problems. But the genuine yearning for democracy, much weakened tribal ties, and rejection of military rule will prevent it from giving in to the never ending separatist demands. Should the Libyans in the west offer the 1963 federalist constitution, they would be extending a hand to their fellow Libyans in the east. But if this hand is pushed away, Libyans should part ways. Unity at any cost is a cost too high.

For: Libya Should Revive the 1963 Constitution