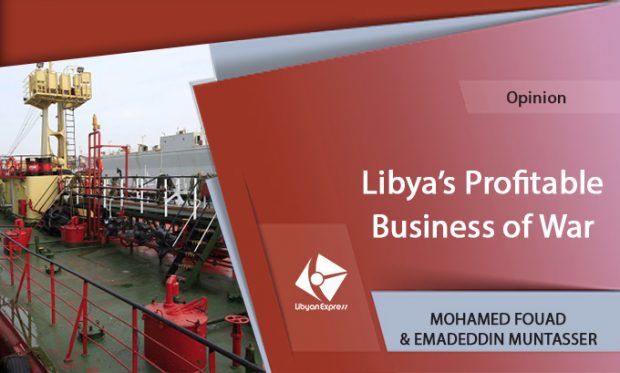 The collapse of the Libyan government under Gaddafi, exposed a lack of transparency and accountability that were part of Gaddafi’s oppressive and corrupt economy. The post-revolution political bickering weakened Libyan institutions further and left no clear system of governance or way of managing competition over Libyan oil, financial, and security sectors.

Short term and personal gains now outweigh other considerations, putting corrupt practices ahead of nation building. Mr. Khalid Shekshak, head of the Audit Bureau and Libya’s top financial watchdog agency, described the current situation as “well beyond corruption…we have reached the state of complete lack of concern for public funds.” Left unchecked, Libya will sink into a failed state on par with Somalia. Along another path, corruption may actually stabilize Libya, but as an international crime syndicate.

Corruption in Libya takes different forms depending on the sectors that it dominates. Militarily, without the government monopoly on armed forces, Libya has split into a few large armed groups, with smaller groups aligning based on needs and finances. Libyans often joke about fighters moving from one side of the fight to another by simply changing their scarf colors. Underlying the changing allegiances is the ability of the rich, usually political leaders, to pay militia members a handsome salary in exchange for their loyalties. Opportunities for wealth induced political groups to coalesce are everywhere and more militia groups continue to organize. Battalions with a few hundred men that were formed to fight Qaddafi during the revolution, swelled to thousands in a matter of weeks after the conclusion of the war.

Informal methods of channeling support to those who revolted against Gaddafi have morphed into a process of buying influence and control. Gulf states, with support from the United States and European countries, transferred millions of dollars and tons of weapons to rebels. These resources have found their way to a multitude of armed groups now vying for more power and wealth. Even after the National Transitional Council (NTC) formed to manage official relations, individual members built their own ties with the Gulf States. As the head of the NTC publicly admitted, governments employees are often gifted with unreported suitcases of cash.

The links between military and political corruption are widespread. Militia General Khalifa Haftar’s civilian sons received senior or military rankings, responsibility for military procurement and to allocate resources without oversight. According to the former spokesman for Haftar, large sums of money were deposited in the personal bank accounts of Haftar’s sons in neighboring countries. Another example is Osama Al-Juwaili. After he assumed office, funds were diverted to the Qaqa and Sawaiq militia groups in his hometown of Zintan

Although politicians rely on militias, those same armed groups are not under the full control of the politicians and may turn against them. Militias have taken control of oil and gas facilities and pressured the government by cutting off the only source of income to the Libyan government, all the while remaining on government payrolls.

Smuggling and human trafficking are also widespread and involve a well-coordinated network of smugglers, warlords, and politicians—operating from deep within sub-Saharan Africa to Libya’s coast. The transportation cost to Europe ranges from a few thousand dollars per refugee to, according to some claims, up to $100,000.00 for a well-to-do refugee family. In 2016, the International Organization for Migration (IOM) estimated that 363,348 migrants and refugees tried to cross the Mediterranean from North Africa to Europe. The authors have confirmed with the IOM office that the vast majority of these migrants and refugees are crossing through Libya, taking advantage of the lack of security. The value of human smuggling may be as high as $346 million.

Corruption in Libya often has international partners who are either complicit or negligent by not following through due diligence to ensure purchasing legitimate goods. In January 2017, the Libyan Attorney General’s Office reported that Libya lost about $3.5 billion due to fuel smuggling. A gallon of Libyan gasoline in state is about eight cents. Just across the sea, in Malta, that same gallon can fetch six dollars—a 7,500% profit. Other European countries are benefiting from the smuggling of subsidized fuel too. Two Italians were arrested as part of a fuel smuggling ring. A UN report claimed that the two were providing fuel to the Italian Navy, although the suspects were arrested before delivering the fuel.

Libyan banks have also fallen into the hands of armed groups and their political allies; becoming another profitable criminal enterprise. A disparity exists between hard currency exchange rates between the official rate at banks and those on the black market. This disparity allows politicians and bank managers, who can obtain dollars and letters of credits, to sell them and pocket the difference. Those profits are used to pay favored militia leaders.

Rather, a multi-pronged approach can reduce incentives for smuggling and other types of corrupt practices. European and Gulf institutions should implement effective laws to prevent corrupt Libyan officials from finding partners in Europe and the Gulf to reduce the demand for smuggled goods. Anti-corruption rules and regulations in the European Union must be made more robust with severe penalties for companies and individuals that participate in any form of corruption. Organizations such as Trace International, that rate and certify companies as corruption free, need more resources and recognition to play a major role in preventing international corporations from engaging in fraud and bribery.

Contrary to the recommendations of the February 3rd Malta conference, smuggling refugees and migrants can best be stopped at the southern borders of Libya, not at the southern shores of the Mediterranean. Trying to train the Libyan coast guard, which is as susceptible to corruption as the rest of the country, will have little effect on stopping migrants and, in cases where it was effective, would leave migrants trapped in a war-torn country. Countries south of Libya are relatively more stable, and will be better able to utilize training and resources to stop migrants before they reach Libya.

Actions working within Libya will, until the country is more stable, have to be limited. Possibilities include removing fuel subsidies so that the profit margin on fuel sales to Europe is not high. The Government of National Accord should be admonished for offering to pay salaries to government employees without relying on the unique national ID for each recipient.

For: Libya’s Profitable Business of War