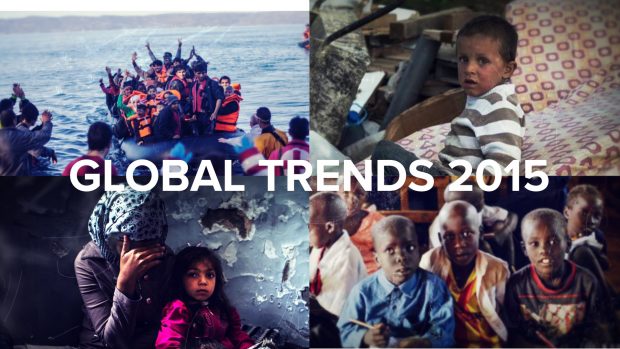 At the end of 2015, the world had 65.3 million people who had been forcibly displaced from their homes, the highest ever number on record, according to the United Nations High Commissioner For Refugees (UNHCR), also known as the U.N. Refugee Agency.

To put that number into context, sample this: The United Kingdom’s population was about 65.1 million at the end of 2015; the two largest U.S. states by population — California and Texas — taken together had about 67 million people, which accounts for more than 20 percent of the country’s total population.

The record figures for 2015 were released on June 20, which also marks World Refugee Day, and showed an increase of 5.8 million displaced people compared to the year before. The total of 65.3 million people includes internally displaced people (those who left their homes but stayed within their own country) as well as refugees seeking asylum in other countries.

About two-thirds, or 40.8 million people, were categorized as internally displaced, while almost a third, or 21.3 million, were classified as refugees. The remaining 3.2 million people were waiting for their asylum applications to be processed, mostly in Western countries. The 21.3 million figure was the highest recorded since the early 1990s, while the other two categories saw their highest numbers ever.

65Million The total number of forcibly displaced people is 1 of every 113 globally. Syria is the single largest source for new refugees, but older conflicts, like those in Afghanistan and Somalia, continue to be big contributors as well.

The total amounts to one in every 113 people around the world, or 0.88 percent of the global population. According to UNHCR, 24 people are getting displaced around the world every minute now. And more than half, about 51 percent, of the world’s refugees are children.

UN High Commissioner for Refugees Filippo Grandi, said: “At sea, a frightening number of refugees and migrants are dying each year; on land, people fleeing war are finding their way blocked by closed borders. Politics is gravitating against asylum in some countries. The willingness of nations to work together not just for refugees but for the collective human interest is what’s being tested today, and it’s this spirit of unity that badly needs to prevail.”

If it were a country, the global refugee population would make the 21st most populous nation in the world. Small wonder that this year’s Olympics in Rio will see the participation from the first refugee contingent.