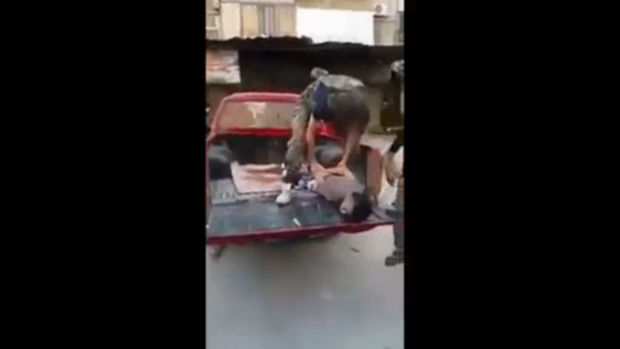 A social media video that got viral yesterday appears to show Syrian rebels beheading a Palestinian boy who they accused of being a pro-government fighter.

The video, posted online on Tuesday, shows a group of men in the back of a truck cutting off the head of the terrified boy.

Before the gruesome murder, the men accuse the boy of being a member of the Liwa al-Quds (Jerusalem brigade), a Palestinian armed group fighting alongside Syrian President Bashar al-Assad’s government.

The Jerusalem brigade posted a statement on its official Facebook page on Wednesday, identifying the boy as 12-year-old Abdullah Issa, who they said was not a fighter.

“He lived in al-Mashhad [Aleppo] with his family, among multiple poor families that live in the area under the control of terrorists,” read the statement, adding that the boy was ill.

“By taking one glance at the child – the argument that he was a fighter is immediately disapproved,” the group said.

In the video, one of the rebels shouts: “He sent us a child today, he no longer has men!” seemingly referring Assad.

“We will leave no one in Handarat,” they added, referring to the city north of Aleppo where heavy fighting between rebels and government forces has been taking place.

The rebels have been identified as members of the Nour al-Din al-Zinki Movement. On Tuesday, the movement published a press release on its Twitter page condemning the killing of the boy and calling the beheading an “individual error that does not represent the general policy of the movement”.

The United States, which has previously provided military support to the Nour al-Din al-Zinki Movement, said it was “seeking more information” and that it could not confirm the “appalling report” at a press briefing on Tuesday.

“If we can prove that this was indeed what happened and this group was involved in it, I think it would certainly give us pause,” State Department Spokesman Mark Toner told reporters, after being asked whether this incident would affect US assistance to this specific group.

The UK-based Syrian Observatory for Human Rights monitoring group said the video shows fighters from rebel factions “slaughtering a boy member from the gunmen loyal to the regime”.

“The boy was captured during the clashes at Handarat camp this morning,” the Observatory said in a statement.