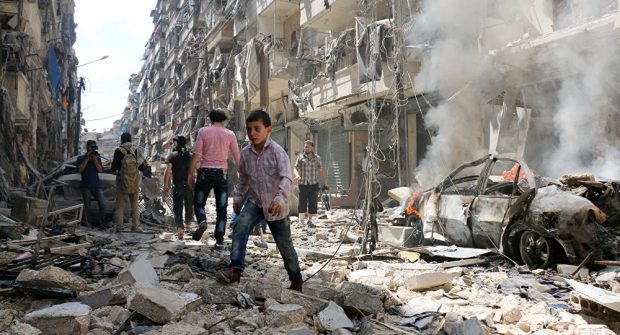 Syrian rebel fighters have launched an assault on government-held districts of Aleppo, after troops cut their only route into the divided northern city.

The rebel operation began at dawn on several fronts, with hundreds of shells being fired at western areas. State media said eight people were killed and dozens hurt by the barrage.

The attack follows a failed attempt by rebels to re-open the Castello Road, the only way out of the rebel-held east for some 300,000 people living there.

Large parts of Aleppo, once Syria’s commercial and industrial hub, have been destroyed since fighting erupted there in 2012.

The city has been the focus of intensified fighting since UN-brokered peace talks and a partial truce brokered by the US and Russia broke down earlier this year.

An AFP news agency correspondent said the rebel offensive on government-held districts began at dawn, sparking fierce clashes along the frontline inside Aleppo.

The Syrian Observatory for Human Rights, a UK-based monitoring group, said more than 300 shells were fired by the rebels as they attacked.

However, the rebels had so far not managed to make any gains because they had come under heavy bombardment by government aircraft, it added.

Ahmed, a resident of the Syriac quarter in western Aleppo, told AFP that the rebel shelling had completely destroyed his home.

“The sounds of the fighting can still be heard and are very loud, and the shelling on the western neighbourhoods is ongoing,” he said.

The rebel assault came a day after 29 rebels were killed trying to push government forces back from the Castello Road, according to the Syrian Observatory.

The key supply route was effectively severed on Thursday when troops and allied militiamen took control of a nearby hilltop, putting them within firing range.

On Friday, a UN spokesman said the Office for the Co-ordination of Humanitarian Affairs was “extremely concerned at the unfolding situation in Aleppo… particularly the situation for the estimated 300,000 people trapped in the eastern part”.