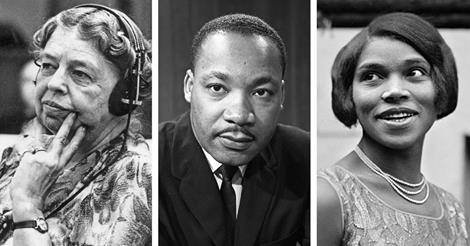 The Treasury Department announced Wednesday that women will be incorporated into new designs for the $5, $10 and $20 bills. Here is a look at the new lineup.

Araminta Ross, known as “Minty,” was born into slavery on the Eastern Shore of Maryland around 1822. When she was about 26, and married to John Tubman, she escaped to Philadelphia and took her mother’s given name, Harriet. She later returned to rescue family members, and was asked by slaves not related to her to help them escape as well. She took great risks traveling at night from the South to the free North via a network of secret routes and safe houses on the Underground Railroad. When the Civil War began, Tubman became a spy for the Union.

Susan B. Anthony was born in 1820 to a Quaker family in Massachusetts and became an antislavery activist as a teenager. With Elizabeth Cady Stanton, she founded and led several women’s groups and suffrage organizations and played a central role in pressing for what would become the 19th Amendment granting women’s suffrage. In 1872 she was arrested on charges of voting in her hometown, Rochester, convicted and ordered to pay a fine. Six years later, she and Stanton presented Congress with an amendment giving women the right to vote. She died in 1906, 14 years before it was ratified.

Elizabeth Cady Stanton, born in 1815, was a pioneer of the women’s rights movement who played a central role in the drive for women’s suffrage. In 1848 at Seneca Falls, N.Y, she presented the “Declaration of Sentiments” that echoed the language of the Declaration of Independence. But Stanton’s version, signed by 68 women and 32 men, denounced the “long train of abuses” inflicted by men on women. “Such has been the patient sufferance of the women under this government, and such is now the necessity which constrains them to demand the equal station to which they are entitled,” Stanton wrote.

Lucretia Coffin Mott, born in 1793, was a Quaker who devoted herself to abolitionist and women’s causes. She played a key role in organizing the Seneca Falls convention and producing the “Declaration of Sentiments” that called for women’s equality. But she was stunned by Stanton’s call at the convention for women to be allowed to vote. “Oh Lizzie, if thee demands that, thee will make us ridiculous!” Mott protested. But she remained a central player in both the antislavery and women’s suffrage movement.

Alice Paul, a Quaker born in 1885 who was taken to women’s suffrage meetings as a teenager, founded the National Women’s Party in 1916. She organized protests for suffrage in front of the White House, many of them resulting in beatings by the police. The effort led to the 19th Amendment. Paul, who had a Ph.D. in economics from the University of Pennsylvania, established a headquarters for the Women’s Party in a house near the Capitol, which President Obama has designated as the Belmont-Paul Women’s Equality National Monument. Mr. Obama has called her “a brilliant community organizer and political strategist.’’

Isabella Baumfree — a Dutch-speaking slave born in 1797 in rural New York — changed her name to Sojourner Truth after she walked off an upstate farm in 1826 with her infant daughter. She became a Christian preacher and grew increasingly political in pressing for abolition, women’s suffrage and prison reform. She delivered her most famous address, “Ain’t I a Woman,’’ in 1851 in Ohio, where she said: “I could work as much and eat as much as a man — when I could get it — and bear the lash as well. And ain’t I a woman?’’

Marian Anderson, a coal seller’s daughter, was born in 1897 and had become one of the world’s most accomplished contraltos by 1939, the year the Daughters of the American Revolution refused to allow her to perform at Constitution Hall because of a “white artists only” clause in its contracts. Eleanor Roosevelt, the first lady, resigned from the D.A.R. in protest and encouraged the Interior Department to find a place for Ms. Anderson to perform. The result was an Easter concert at the Lincoln Memorial that drew 75,000 people, with millions more tuning in on the radio.

Eleanor Roosevelt, born in New York City in 1884, was the first lady from 1933 to 1945 and redefined the role. Shortly after arriving at the White House, she held the first news conference by a president’s wife and continually surprised the country with her outspokenness and activism. After the death of President Franklin D. Roosevelt in 1945, she was named a delegate to the United Nations General Assembly. She traveled the world as a human rights advocate, lecturer and writer until her death in 1962. Her intervention on behalf of Marian Anderson remains among her best-known moments.

The 1963 March on Washington for Jobs and Freedom was not the first time the Rev. Dr. Martin Luther King Jr. uttered the now-famous phrase: “I Have a Dream.” He had said it before in speeches in Detroit and North Carolina, but it did not become a national refrain until the day the Baptist preacher, who became the voice of the civil rights movement, used it before 250,000 people on the steps of the Lincoln Memorial. The phrase was part of a broader speech about racial justice and equality, but the four words has endured as one of the most powerful, pivotal moments in American history.

For: US Treasury Department announced new faces on dollar bills