Zidane: “When you put this shirt on, everything is possible” 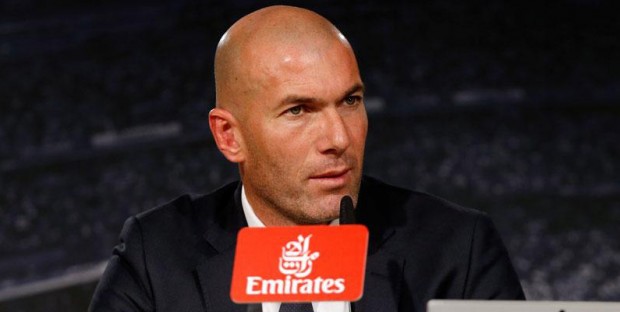 Zinedine Zidane gave his first press conference as manager of Real Madrid. The coach was accompanied by Emilio Butragueño, director of institutional relations, who welcomed him saying: “You are a legend at our club and someone who is loved. During five seasons you delighted us with your game and today you take on your role directing from the bench. You know the club very well and we are convinced you will have a lot of success”.

The French manager later responded to questions from the media in the press room at the Santiago Bernabéu: “I have a good feeling. I’m ready for the challenge, I’m motivated and excited. It’s going to be a difficult challenge for me but I’m up for it. I’m looking forward to taking this opportunity with the best team in the world. I only want to win trophies with this team”.

The European Cup
“Winning it is fundamental for this club. We’re in the round of 16 and it’s always been the objective to win the Champions League, and it always will be. When you put this shirt on everything is possible, any objective can be real”.

Objective
“I want to bring the exciting game that this club has always had. The important thing is to play football and my job will be based on playing from the back, progressing in to the opposition half quickly and having possession of the ball. I would be happy to win everything. Our objective is to win, we’ve got two trophies that we can win and we’re going to try until the end of the year”.

First impression
“My first words have been important for all the players because we’ve trained in front of the fans. I said to them that I’m very happy to be beside them, that a new adventure is starting and that we are going to try to do everything possible to complete the objectives”.

Pressure
“It’s fair. I’m going to try to entertain and in every game we will go out to win playing well, working hard and giving our all, they are the values of madridismo. I’m going to try and do it like that, playing well. I made the decision yesterday. It happened quickly, they offered it to me and I accepted”.

The squad
“You have to be close to the players and have a good relationship with all of them. I’m responsible for the team and I want everything to go well. The way the players are handled will be different to with the Castilla players because they are experienced players and Real Madrid players. The message for them will be the same, it will be based around the hard work and intensity which we will have in every game and the excitement that will go in to every training session”.

“It’s definitely a difficult challenge. I’m sure of the work that I’m going to do day to day with my players. I don’t speak a lot for the press, but the day to day work is fundamental and important. I’m looking forward to transmitting one thing to the players: winning”.

“I HAVE SEEN A TEAM THAT IS FOCUSED, LIVELY AND HARDWORKING.”

His image in the dressing room
“It’s important because I’m part of this club as a player. This is a new phase and he most important thing is to do things well with my players and win games. The only thing important to me is winning games.

Changing the manager in the middle of the season
“The important thing is to keep the players’ spirits high, I think they’ve done a good job. We have to think that the work done by Benitez has been good and I want to wish him all the best for the future. My message is work. We are going to try to do things right, help the players and that is all. I hope that my football is positive and balanced. That Is what I want to bring and going forward we’ll see”.

James, Isco, Modric and Kovacic
“The entire team is going to be important. They are great players and they are going to be improtant for me, the fans and for everyone. In the future we will see the side that is going to play”.

Bale
“I understand that he may be annoyed with Benítez leaving because he was an important manager for him, but he will get the same care from he. He is a crucial player for the side and I can say nothing else. I am going to give him all the possible care and support so that he plays well”.

The BBC
“I am always going to play with the three. That is my clear idea”.

Comparison with other managers
“There is no need to do that. Guardiola is Guardiola and I am going to try and do things as well as possible. Guardiola is a fantastic manager and is doing really well, but I am not going to make comparisons. The day to day work is what is important and what I am going to contribute to the squad. I am going to do everything possible to ensure that everyone works well”.

Ancelotti
“I have had him as a manager too and I worked with him as assistant coach. What he told me is that the most important thing is to win games and for the players to be in good form”.

Differences with Benítez
“I am going to try to add a personal touch and an attacking touch. I will try to maintain my managerial playing style and I want to get the players to have a good time out on the pitch. I have to contribute something more and that is what I am going to do on a day to day basis with my work”.

His assistant coach and contract
“There are people that have already worked with me at Castilla. That is my working team and we are not going to look for an assistant manager. I have a two and a half years’ contract. We have yet to talk about the contract as first team manager. We will do soon”.

For: Zidane: “When you put this shirt on, everything is possible”