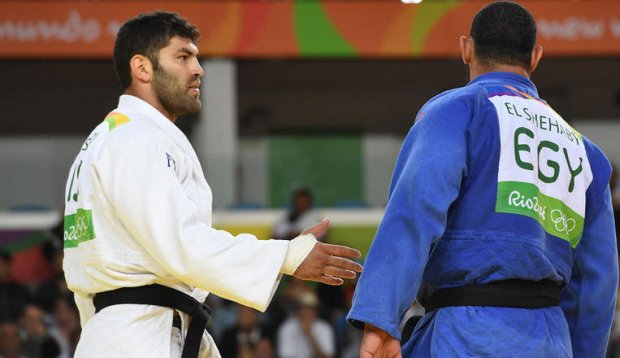 Egyptian Islam El Shehaby refused to shake the hand of Israeli opponent Os Sasson after losing in the men’s judo at the Rio Olympics.

El Shehaby was roundly booed by the crowd and was called back to the stage for his failure to bow to his opponent as it contravenes judo rules.

“El Shehaby backed off after Sasson went over to him,” said BBC judo commentator Mark Doran. “That is very disappointing. That is what the Olympics is not about. To his credit, Sasson just moved on.”

Sasson later revealed his coaches had warned him El Shehaby might refuse to shake his hand. The Egyptian had come under pressure from some conservative voices in his homeland to withdraw from the bout.

“I knew he would do it, so it wasn’t a surprise for me,” Sasson said.

The International Olympic Committee said it was looking into the incident.

“The Olympic movement should be about building bridges, not erecting walls. There’s absolutely no excuse for it,” a spokesman said.

For: After losing the wrestling match, Egyptian Judoka refuses to shake hands with Israeli opponent