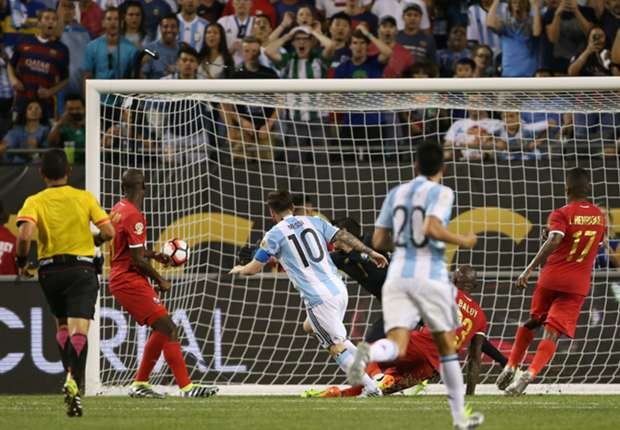 Messi scored three second-half goals in his return from a back injury, and Argentina clinched a spot in the knockout round of the Copa America Centenario with a 5-0 victory over an overwhelmed Panama team weakened by a flood of yellow cards.

“Happy, happy to be back, to be able to play after resting for some time,” Messi said. “I really wanted to play … for the outcome, for the goals. Very happy, to be honest.”

Messi replaced Augusto Fernandez in the 61st minute, drawing a big ovation from a sea of No. 10 Argentina jerseys and the familiar colors of Barcelona, his club team. A few minutes later, the five-time FIFA Player of the Year got right back to work.

First, Roderick Miller’s clearing attempt for Panama went off Gonzalo Higuain’s hands as he went to protect his face and right to Messi, who took a couple dribbles and then beat Jaime Penedo on the ground to the goaltender’s right side. Then Messi sent a curling free kick from about 24 yards into the top left corner of the goal in the 78th minute, making it 3-0 and drawing gasps from the crowd of 53,885 at the home of the NFL’s Chicago Bears.

A left-footed chip past Penedo on the goaltender’s right side finished off Messi’s fourth international hat trick, joining friendlies against Switzerland and Brazil in 2012, and Guatemala in 2013. It also ran Messi’s total to 53 international goals, just three away from Gabriel Batistuta’s Argentine’s record.

“When Messi got up, I asked the fourth referee, ‘How much time left,’” Panama manager Hernan Dario Gomez said. “‘Thirty minutes,’ and we were already spent. Messi is a monster.”

It was quite a show after Messi departed in the second half of a 1-0 victory against Honduras on May 27 with a back and rib injury. He also missed Argentina’s 2-1 victory over Chile in the Copa opener, but manager Gerardo Martino said Thursday he was training with the team and ready to go against Panama.

Nicolas Otamendi scored on a header off a curving free kick by Angel Di Maria in the seventh minute, and Sergio Aguero made it 5-0 in the 90th minute. Di Maria was examined by doctors after he left with an injury right before halftime, but Martino can afford to be cautious with Argentina already through to the quarterfinals before its final Group D game Thursday night against Bolivia in Seattle.

“Most of all I think that we need to respond to the situation of some players that have yellow cards. … how to make some changes without altering the structure of the team,” Martino said.
Panama can advance to the next round with a victory over Chile on Thursday night in Philadelphia, but it will be without key forward Blas Perez, defender Felipe Baloy and midfielders Armando Cooper and Anibal Godoy after the team was whistled for six yellow cards. Midfielder Valentin Pimentel was carried off on a stretcher in the 20th minute.