erard Piqué leapt into the air, the ball heading past Keylor Navas and into the net. Fifteen days later, he collapsed to his knees as the ball went past Diego Alves and past the post too. The location was the same – near the top right corner of the six yard box at north end of the Camp Nou – but everything else had changed and fast; so fast Barcelona could barely comprehend what had happened. The final whistle went on Sunday night and a long, tortuously slow walk to the tunnel followed, like a lonely and silent search for an explanation, but the central defender could find none. “It’s incredible that the stars have aligned against us like this,” he said.

When Piqué scored the opening goal in the 56th minute of the clásico, it moved Barcelona 13 points ahead of Real Madrid, nine clear of Atlético. It was 9.45pm on Saturday April 2 and the title race was over. Or so everyone thought. But when Piqué controlled on his chest and struck wide last night, it denied Barcelona an equaliser and left them just one point ahead of Madrid, none at all ahead of Atlético. It was 10.15pm on Sunday April 18 and as this last chance slipped away in the 89th minute, so did their hopes. Barely a fortnight had passed, two and a third games, but he’d gone from flying to fallen.

Win the clásico and Madrid will be out of it, Luis Enrique had said. Zinedine Zidane had already conceded defeat a couple of weeks before. And as for Diego Simeone, he warned of Barça that “these guys don’t make mistakes”. But, suddenly, they did make mistakes and lots of them. Piqué put Barcelona into the lead, one goal and 13 points ahead of their rivals, but Madrid came back to beat them 2-1, the first team to do so after 39 matches. The team that couldn’t lose couldn’t win; 39 unbeaten became a solitary win in five, and a worthless one at that. Spanish football hasn’t seen a collapse this spectacular, unexpected or absurd since … well, since any given penalty area on any given Sunday.

Barcelona thought it was done, which may be part of the reason why it wasn’t. Now, they fear it’s gone. The treble has; the league could follow. The advantage was huge; now only head-to-head keeps Barcelona top. Hay Liga, that’s for sure. Out of the Champions League, Sunday night’s 2-1 defeat to Valencia was Barcelona’s third in a row in the league and leaves them having collected just one point from 12. They’ve not endured a run this bad since 2003 when the man who admits to being the worst president in the club’s history was in charge and when Louis Van Gaal was in a second spell that drew the simplest and cruellest of conclusions from culés: that they were right to hate him the first time.

Few foresaw this, although Gareth Bale was among those who did. “You never know, football does funny things to teams when you lose and you never know what could happen,” he said after the clásico. “All they need is a few bad results and we need a few good ones and we’re right back in it.” Not just them, either: Atlético too.

Something funny has certainly happened to Barcelona. Funny strange, that is, not funny ha ha, although there are plenty laughing their heads off. They’ve had plenty of opportunities to end it, given a second chance, and a third, and a fourth, but they’ve failed to take any of them. And now look where they are. No more second chances, no more cushion.

Against Villarreal they were 2-0 up when they brought on Jérémy Mathieu late in the second half and he scored an own goal in a 2-2 draw. Some acted like it was a good result, but it wasn’t, even if Villarreal are an excellent side. Then came the international break, followed by the clásico. And that’s when it really began to fall apart.

Barcelona were due to play Atlético three days later in the Champions League and not only did they play the clásico like a team whose players had crossed the Atlantic, they also played like a team that knew that they had Atlético three days later; they appeared to be trying to hold something back – as they have done for months, in fact, which may just be part of the problem. Is it really so easy to shift back up through the gears? They seemed happy at 0-0 and so, in truth, did Madrid. They were happier at 1-0. But Madrid weren’t and, after a stampede in the final 20 minutes, Zidane’s side came back to win.

Still, it was in Barcelona’s hands, their grip firm. “Realistically, there probably isn’t a title race, no,” some fool wrote. “If we win at Anoeta, we’ll be champions,” ran one Catalan cover the following weekend, claiming that was the belief within the squad. They might have been right too but instead, they lost 1-0. Champions League elimination followed, against Atlético. And then this.

This was different. This time Barcelona attacked; this time they played pretty well. At times, at least. There they were coming forward in waves, rolling over their visitors. There was intensity and intent, the ball moved quickly, chances created. Lots and lots of them, right from the start. A run through the notes from the Camp Nou tells a story: “Suárez volley. Messi, superbly saved Diego Alves. Six yards. Messi, Rakitic, Suárez, scuffed. Fast. Messi, Alba, Suárez. Neymar: should score. Clean through, lob, Alves slaps it away. Suárez over, from one yard. Messi: Alves save. 20’. Impressive start, this.” But somewhere in the middle of it all, the scrawl says: “what a chance, Rodrigo!” And then it says, in capitals: “1-0 Valencia!”

A cross from Guilherme Siqueira was deflected past Claudio Bravo by Ivan Rakitic at the near post and Valencia had the lead. Soon, it was doubled. Neymar, Rakitic, Messi, Sergi Roberto … Santi Mina, 2-0. Barcelona could barely believe it; now they had to rebel and they did. Although they had not overturned a 2-0 deficit at home since 1947, it looked like they might turn this match around when Messi scored to make it 2-1. It sounded like it too: the Camp Nou was roaring. But it didn’t happen; there were shots, Valencia getting deeper, but there were fewer chances now; more offsides than opportunities. And when Piqué controlled and shot wide in the 89th minute, it was over. Somehow, they had lost. They had lost a lot. The lot?

“It seems inexplicable but it happens,” Iniesta tweeted. “That’s football too,” Rakitic said. “It could have finished 3-2 or 4-3 or 5-4,” Pako Ayestarán admitted, while Luis Enrique insisted: “This is the path.” Gerard Piqué said: “I would almost rather lose playing like that than win playing the way we have recently.”

There was something in that point: at least there was a reaction from Barcelona, some football too. Some of the pace and precision so lacking in recent weeks. The way they played suggested that Luis Enrique may be right to insist that there is no physical problem, although doubts linger there.

Yet this did not always convince, and that is a familiar feeling: going back even to when they were winning, victories disguising flaws. Their best players last night were probably Piqué and Javier Mascherano, which is not exactly a good sign. The midfield again lacked control, failing to impose itself on the game. The two full-backs, Jordi Alba and Sergi Roberto, delivered incredibly few decent balls into the area; when Alba at last did, Messi scored. Suárez continues to miss chances he didn’t before. Neymar’s form has fallen alarmingly. And it was telling that Luis Enrique did not use a single substitution: he didn’t even send anyone out to warm up. On the bench were four full-backs, a central defender, a sub goalkeeper and Munir.

Above all, there’s a reality, once so avoidable but unavoidable now. Barcelona began this game knowing that they had to win after Madrid and Atlético had beaten Getafe and Granada, but they didn’t. Again. “Hunted!” runs the cover of AS. “Just one point!” they had said the day before. Now the gap at the top of the table was nought to Atlético, a solitary point to Real. The league has not looked like this for a long time. Barcelona 76, Atlético 76, Madrid 75. The cushion has gone; Barça can afford no more slip ups and, while Ayestarán said “they can win five, eight or 10”, when he was asked if Barcelona could win all five games, one would be a start as a new league title race opens up; a fascinating, tense five game sprint to the finish. 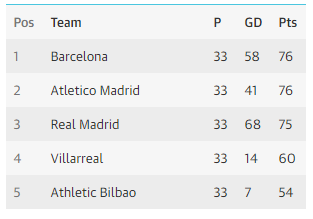 “People wanted an equal league; well, you’ve got it,” Piqué said. Three Spanish teams with an almost equal chance of winning the title and four Spanish teams with a chance of a double this season: Barcelona, Atlético, Madrid and also Sevilla, who are in the Europa league semi-finals and face Barça in the Copa del Rey final.

That would be a huge achievement for any of them, of course. Yet for Barcelona, having chased a treble, having had the league virtually in their hands, it almost feels like an obligation now and a far from easy one, even if they do have that head-to head advantage and despite Piqué last night insisting: “I am absolutely convinced that we are going to do it.” Right now it would be tempting to suggest they are the least likely of the three to win the league. The momentum has shifted: Barcelona have lost three on the trot; Madrid have won seven in a row; Atlético have won seven of their last eight. And, speaking of obligation and the pressure it applies, Diego Simeone last night tweeted “objective fulfilled” after Atlético mathematically confirmed a Champions League place. That sheep’s clothing suits him. It could be that the fixture list does as well.

Madrid and Atlético have the Champions League too of course but even the apparent “advantage” of being out of Europe may be no such advantage for Barcelona: with fixtures this Wednesday, there will be no break for them, no seven-day preparation for each match. In fact, they will play three times in six days, starting in La Coruña – where they will be without Piqué, who is vital. Atlético go to Bilbao. Madrid face Villarreal and at 10pm: they kick off knowing the results from the other two. Mind you, Barcelona “know” the results too. Asked last night if he thought that his team would need to win all five to take the title, and if they were capable of doing that, Luis Enrique responded: “Yes and yes.”

“We’ve used up all our credit but win five games and we win the league,” he said. “It’s a wonderful challenge and one we happily accept.”