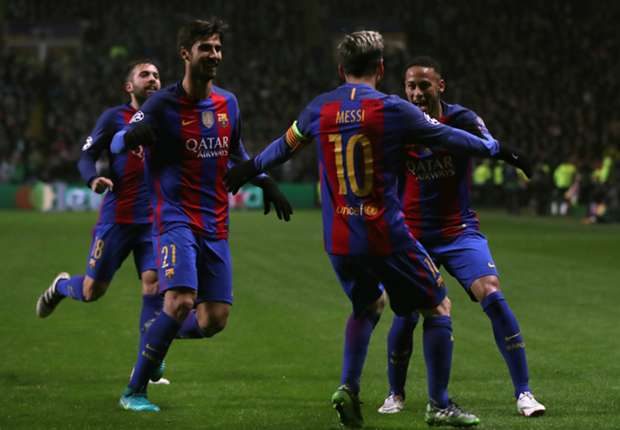 Barcelona sealed their place in the Champions League last 16, and top spot in the group, with a comfortable win over Celtic.

It wasn’t an easy night for them at a fiery Celtic Park but after Lionel Messi opened the scoring in the first half, with a beautifully taken strike after Neymar’s inch-perfect chipped pass, they never really looked like letting that lead slip.

Luis Suarez came close to adding the second just before the interval, with a header that Craig Gordon did well to keep out, but Barcelona extended their lead early in the second half.

The Uruguayan striker was grappled with in the box by Emilio Izaguirre and the referee pointed to the spot. Messi dispatched it coolly—are his penalty woes over?—and Barcelona had the lead they maintained until the end.

Celtic fought hard and were much improved from the first clash between these sides in the group which Barcelona won 7-0 at Camp Nou, but despite being roared on by their fans, it was unlikely that a result was forthcoming.

Neymar and Rakitic’s yellow cards were the perfect nightcap for Barcelona, with both players banned from the dead rubber against Borussia Monchengladbach and then free to play in the knock-out rounds.