Barcelona gets back on track in La Liga, wins 5-1 over Leganes 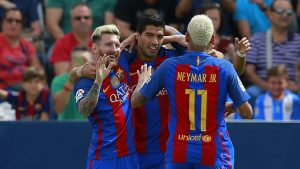 Messi and Suarez were rested from the starting XI as Barca suffered a shock 2-1 defeat by Alaves last week.

Both started on Saturday, with Messi tapping home before setting up Suarez, and Neymar made it 3-0.

The win moved Barcelona level on points with Real Madrid, who are away to Espanyol on Sunday.

Despite facing a league game against Atletico Madrid next Wednesday, Enrique took no risks this time against another club promoted from Spain’s second tier as Barca carried on where they had left off after hammering Celtic 7-0.

Leganes, a town of 185,000 people and 11km from Madrid, are playing in La Liga for the first time in their 88-year history. Three years ago they had no training ground and the pitch was full of potholes.

This was uncharted territory for Barca but Enrique’s side were at their ruthless best as they picked off their spirited opponents in a game sprinkled with six yellow cards.

Leganes frustrated the visitors for 15 minutes before Messi broke the deadlock with a tap-in after a Suarez assist.

The Argentine returned the favour for Suarez to double the lead from close range before Neymar rolled home the third after Messi and Suarez had combined shortly before the interval.

Messi made it five goals in two games from the penalty spot after Neymar was fouled by Unai Bustinza.

There were still 26 minutes of normal time remaining when Rafinha found the top left-hand corner with a curling effort.

Yet Leganes were not finished and their fans celebrated wildly a historic first home goal in La Liga, a sublime free-kick by Gabriel.

For: Barcelona gets back on track in La Liga, wins 5-1 over Leganes