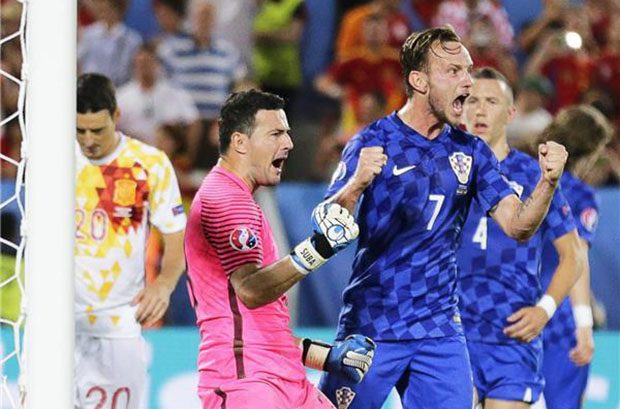 Croatia has beaten Spain 2-1 and tops Group D, forcing Spain into playing Italy in the next round.

Spain will play Italy in the last 16 of Euro 2016 after a late Croatia winner condemned them to second in Group D.

Spain took the lead when Cesc Fabregas placed the ball over keeper Danijel Subasic and Alvaro Morata tapped in.

An Ivan Rakitic lob hit the woodwork for Croatia, who equalised when Nikola Kalinic turned in Ivan Perisic’s cross.

Subasic saved a Sergio Ramos penalty and Perisic’s late winner gave Croatia, who finished top of the group, a tie against a third-placed qualifier.

Perisic lashed in an 87th-minute shot in a thrilling match to inflict Spain’s first defeat in 15 games at the European Championship since losing to Portugal in Euro 2004.

Croatia will now play on Saturday in Lens, while Spain’s mouth-watering tie against Italy – a repeat of the 2012 final – will take place on Monday in Paris.