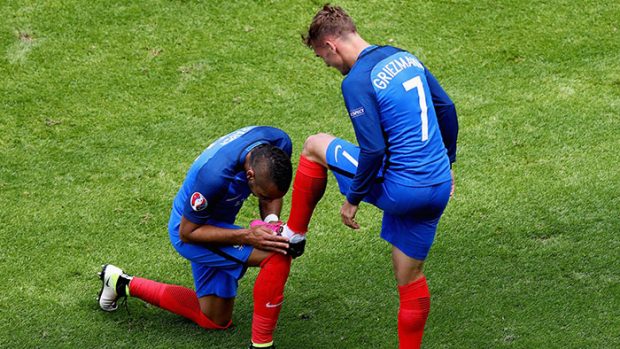 Ten-man Ireland bid farewell to Euro 2016 with a 2-1 last-16 defeat to host nation France at the Stade de Lyon this afternoon.

Robbie Brady grabbed a shock opener for Ireland with less than two minutes on the clock as he smashed home a penalty, following a foul on Shane Long.

But France were more than worthy of their victory as they maintained relentless pressure on the Ireland rearguard.

Ireland had little in the tank to mount a comeback, especially after being reduced to ten men in the 66th minute for a Shane Duffy professional foul, and did well just to keep the deficit to the minimum.

There couldn’t have been a more explosive start to the game in Lyon as Ireland were awarded a penalty with little more than a minute on the clock.

A long ball out of defence was held up well by Daryl Murphy, who laid the ball off to the advancing Stephen Ward on the left. The cross into the box was not cleared and Shane Long latched onto the loose ball.

Paul Pogba lunged in to clear but Long got between man and ball before being taken out. The referee really had no other option but to award the penalty.

Brady assumed responsibility and smashed a left-footed effort low to Hugo Lloris’ left. The ball cannoned off the inside of the post but thankfully for Ireland rebounded into the back of the net to stun the hosts and their fervent home support.

For: France beats Ireland 2-1 and moves to quarterfinals