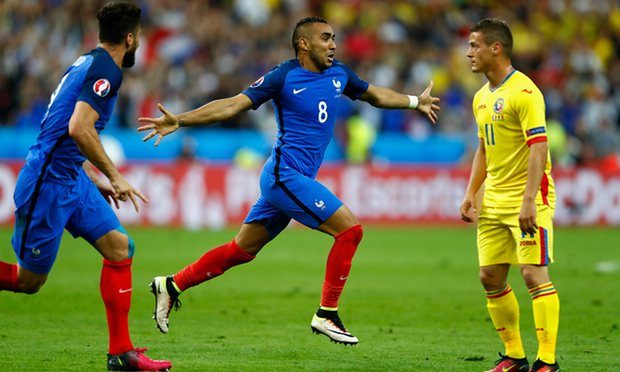 The game seemed to be headed for a draw after Bogdan Stancu’s penalty levelled Olivier Giroud’s opener, but Payet sent the Stade de France into raptures with an 89th-minute winner.

Romania should have been in front inside four minutes. Nicolae Stanciu floated a corner in from the left, it was flicked on and fell to Stancu completely unmarked in the six-yard area — but he somehow shot straight at Hugo Lloris with the goal at his mercy and France scrambled it behind for another corner.

France took the lead in the 57th minute, and Giroud made amends for his misses. Payet was again the architect, crossing from the right flank, and the Arsenal striker got there before Tatarusanu to head into an empty net. The goalkeeper claimed he was fouled but in truth he wandered into no man’s land and Giroud was probably one step ahead.

But the lead didn’t last long as Romania equalised in the 65th minute. Patrice Evra was adjudged to have tripped Stanciu in the area, and Stancu made no mistake in sending Lloris the wrong way from the penalty spot.

Ovidiu Hoban had an ambitious effort 10 minutes from time but it went way over Lloris’ goal, before substitute Anthony Martial hit a tame shot straight at Tatarusanu.

But just as it looked like France had run out of ideas, Payet produced a stunning winner in the 89th minute. He created space for himself just outside the box before curling a superb left-footed effort into the top corner of the net.

Moussa Sissoko burst clear in added time looking for third but smashed a shot well wide from the edge of the box.

For: France opens Euro 2016 with tough 2-1 win against Romania