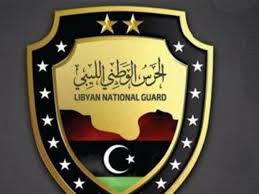 The Libyan National Guard (LNG) denounced in a statement the ongoing clashes in Abu Salim, Tripoli, between the Ghaniwa and Burki armed brigades.

The LNG condemned using heavy and medium weapons and fighting in the heavily populated neighbourhood of Abu Salim that led to a wave of civilian displacement, properties destruction and casualties.

The LNG also called on the GNA’s Interior Ministry to investigate the fighting and bring the ones responsible for it to justice. 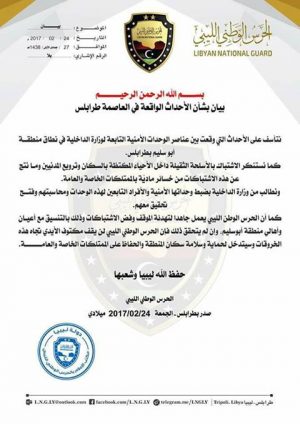 “We’re doing our best to coordinate with Abu Salim’s elders and notables to contain the fight and reach a ceasefire. We will not stand by and watch the fight goes on among civilians and if necessary, we will interfere to bring the fight to an end and secure the lives of the residents.” The statement reads.

Conflicting news reported Friday afternoon that about 10 people from both sides of the clashes in Abu Salim, downtown Tripoli have been killed and several others have been injured.

The clashes between Ghaniwa and Burki armed forces that are positioned in Abu Salim district continued on Friday with heavy and medium weapons used to shell randomly densely populated neighbourhoods.

Civilians have been seen fleeing the district of Abu Salim in Tripoli after hours of clashes that started late on Thursday.

Shops, houses and other private properties have been caught in fire by random shelling from both sides.

According to sources, tanks and armored vehicles are everywhere on Abu Salim streets in what appears fierce stance for continuing the war among the residents who are stranded insides the neighbourhoods.

The British Embassy in Libya has expressed concern over the clashes, calling on all parties to allow civilians to depart clashes’ areas safely.

The two warring sides have many times clashes among civilian houses causing panic and destruction.