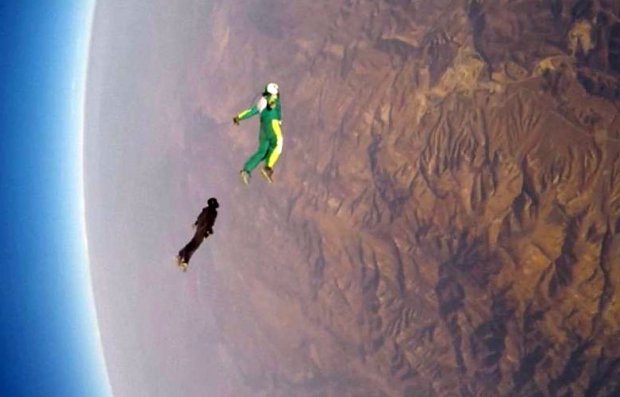 American Luke Aikins has become the first person to jump from 25,000 ft (7,620m) without a parachute, landing safely in a net.

Mr Aikins – who has more than 18,000 jumps under his belt – fell dead centre into the 100x100ft net in Simi Valley, southern California.

During the two-minute fall aired live on Fox television, the 42-year-old reached the speed of 120mph (193km/h).

To loud cheers, he climbed out of the net and hugged his wife and young son.

“This thing just happened! I can’t even get the words out of my mouth,” he said, admitting that he was nervous beforehand.

He also admitted that he had nearly had to cancel the jump because he was ordered to wear a parachute for safety and this would have made his landing more dangerous because of the extra weight.However, the organisers had lifted the ban just minutes before the jump.

“Aikins’ leap represents the culmination of a 26-year career that will set a personal and world record for the highest jump without a parachute or wing suit,” his spokesman Justin Aclin said.

Mr Aikins, who is a safety and training adviser for the US Parachute Association, said his friend came up with the idea two years ago.

For: Luke Aikins makes first jump in history from 7.620m without parachute