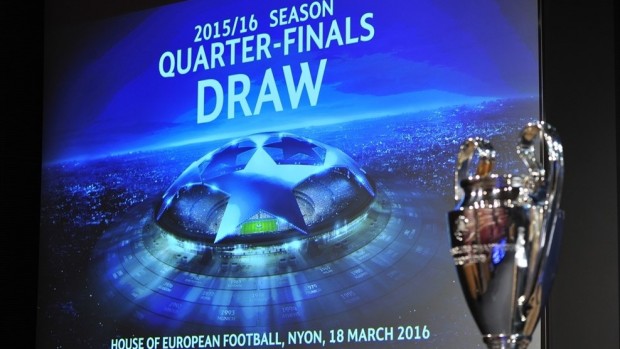 After reaching their first ever Champions League quarter-final, Manchester City were drawn against Ligue 1 holders and Chelsea conquerors Paris Saint-Germain.

There will be an all-Spanish tie between Barcelona and Atletico Madrid while Real Madrid will play Bundesliga side Wolfsburg.

Pep Guardiola’s Bayern Munich will play Benfica in the other last-eight game.

The quarter-finals will take place on April 5 and 6 with the second legs following a week later on April 12 and 13.

After defeating Dynamo Kiev 3-1 on aggregate in the last 16 Manuel Pellegrini’s side secured passage to the quarter-finals for the first time since first qualifying for the competition in 2011.

Zlatan Ibrahimovic inspired PSG to a two-legged victory over Chelsea in the previous round and will be looking to repeat the feat against English opposition once more.

But Luis Enrique’s side have beaten their La Liga rivals twice already this season with the Catalan giants winning 2-1 on both occasions.

And Diego Simeone’s side needed a penalty shootout to beat PSV Eindhoven after the Dutch champions held them at bay for 210 minutes over the two legs.

Real Madrid and Bayern Munich were handed kinder draws with Zinedine Zidane’s side facing Wolfsburg, who beat Manchester United in the group stage in December.

Cristiano Ronaldo, the competition’s top goalscorer this season, was in supreme form as he netted in both legs of the 4-0 aggregate victory over Roma in the last 16.

After beating Louis van Gaal’s United 3-2 in a thrilling game in December, Wolfsburg secured their place in the quarter-finals with a 4-2 victory over Belgian club Gent.
Bayern Munich came through a sensational two-legged tie against Serie A league leaders Juventus 6-4 on aggregate.

Thomas Muller’s last-gasp equaliser took the tie into extra-time with the sides locked at 4-4 over 180 minutes, before Bayern powered through in extra-time.

They face Portuguese side Benfica, who beat Zenit St Petersburg 3-1 on aggregate.

For: Manchester City plays PSG in hot quarter-finals match in the Champions League