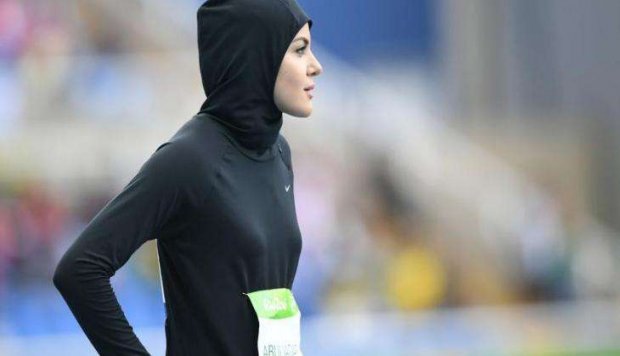 Sprinter Kariman Abuljadayel became the first woman from Saudi Arabia to compete in the Olympic 100m.

The 22-year-old, dressed in a full-body kit and hijab, was unable to qualify, finishing seventh in her preliminary heat in a time of 14.61 seconds.

Afghanistan’s Kamia Yousufi also raced in a hijab and full bodysuit, finishing last in her heat in 14.02secs.

Aged 19, she wore full clothing and a hijab as she finished last in her 800m heat in London, clocking two minutes 44.95 seconds in London – more than 43 seconds behind heat winner Janeth Jepkosgei Busienei of Kenya.

Attar is due to compete in the women’s marathon at 13:30 BST on Sunday.

The Saudis lifted their ban on women competing in the Olympics in 2012.

Wojdan Ali Seraj Abdulrahim Shahrkhani competed without a hijab in the judo competition in London, aged 16.

For: Meet Saudi Arabian first female to ever compete 100m in Olympics