Messi and other celebrities scandalized by Panama leaks 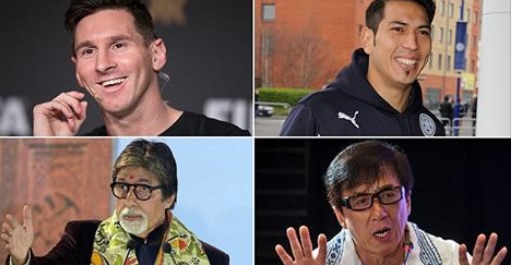 Megastars Jackie Chan and Lionel Messi are among the big names celebrities named in the Panama files as using the controversial law form to invest their millions offshore.

At least 20 other footballers from super teams Barcelona, Real Madrid and Manchester United are also said to have used Mossack Fonseca’s services to set up offshore havens.

The business, which still exists in Panama, is said to have handled millions from the Barcelona star’s image rights contracts.

Martial arts actor Jackie Chan is also named in the leaked documents as having at least six offshore companies managed through the law firm.

India’s biggest Bollywood star Amitabh Bachchan – known as ‘Big B’ – was a director of at least four offshore shipping companies.

As names of clients continue to emerge, it has been revealed that many millionaire footballers have been funnelling cash to offshore havens with the help of Mossack Fonseca.

Premier League star Leonardo Ulloa, who was Leicester City’s top scorer last year, was named in documents after an associate used the law firm in 2008 while he was playing in Argentina.

Argentine full back Gabriel Heinze set up a British Virgin Islands (BVi) company in 2005 in the same year he signed a $1million boot contract with Puma while playing for Manchester United.

Former Real Madrid and Chile star striker Ivan Zamorano, once voted in the greatest 100 players of all time, had a business in the BVI, where businesses pay no tax on profits.

Michel Platini allegedly turned to Mossack Fonseca to help him administer an offshore company created in Panama in 2007.

Platini is serving a six-year ban from all football-related activity for an ethics breach after former FIFA president Sepp Blatter approved a $2 million payment to the Frenchman in 2011 for consultancy work done without a contract a decade earlier.

The names were found in more than 11million documents from Panama-based law firm Mossack Fonseca going back 40 years illustrate how the wealthy are dodging sanctions and laundering money.

The leak – thought to be the biggest ever – contains more data than the amount stolen by former CIA contractor Edward Snowden in 2013, and could inflame the debate about offshore tax havens.

Among the disclosures are that six members of the House of Lords and three former Conservative MPs had offshore accounts, although none were named last night. Dozens of donors to UK political parties had similar arrangements, the leak reveals.

While using offshore companies is not illegal, the morally dubious practice is under the spotlight amid a wider examination of tax avoidance by firms such as Google.

Mr Cameron said four years ago that some offshore schemes were ‘not fair and not right’. He added: ‘Some of these schemes where people are parking huge amounts of money offshore and taking loans back just to minimise their tax rates, it is not morally acceptable.’

But critics say little has been done – with the PM due to hold his latest summit on the issue next month.

The Prime Minister will now come under intense pressure to abolish all the UK’s tax havens, including the crown dependencies Jersey, Guernsey and the Isle of Man.

In 2012, it emerged that the Prime Minister’s father Ian ran a network of legal offshore investment funds.

The leaked records were obtained from an anonymous source by the German newspaper Süddeutsche Zeitung, and shared by the International Consortium of Investigative Journalists with The Guardian and the BBC.

The data covers nearly 40 years, from 1977 to the end of 2015, and lists nearly 15,600 paper companies set up for clients who wanted to keep their financial affairs secret.

Thousands were created by UBS and HSBC, the latter of which was fined by the US government for laundering money from Iran.

Mossack Fonseca is Panamanian but runs a worldwide operation.

Others were Ayad Allawi, ex-interim prime minister and former vice-president of Iraq, Petro Poroshenko, the current president of Ukraine, and Alaa Mubarak, the son of Egypt’s former president.

The leaks also reveal a suspected billion-dollar money laundering ring that was run by a Russian bank and involved close associates of President Putin.

Mossack Fonseca said in a statement: ‘Our firm has never been accused or charged in connection with criminal wrongdoing.

‘If we detect suspicious activity or misconduct, we are quick to report it to the authorities.’

For: Messi and other celebrities scandalized by Panama leaks