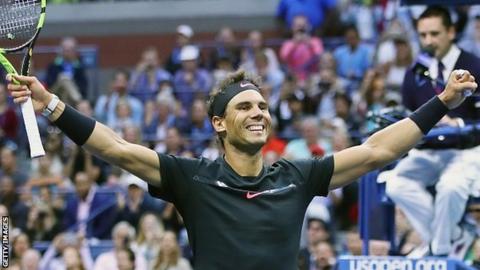 Rafael Nadal, back at No. 1 at age 31, underscored his resurgence by defeating Kevin Anderson of South Africa, 6-3, 6-3, 6-4, in a U.S. Open singles final on Sunday that was no surprise at this late stage of this tennis revival.

“I was surprised in January — now I am not that much surprised, no?” said Nadal, left eyebrow, as ever, arching, referring to his Australian Open final against Federer.

Nadal claimed his third U.S. Open championship and his first since 2013. It was also his first title in a hardcourt tournament since winning in Doha, Qatar, in January 2014.

But Nadal, with his innate competitive streak, is much more about confronting today’s challenges than obsessing over the past, and this triumphant season has been a testimony to his uncommon resilience and drive.

Like the 36-year-old Federer, his past and present rival, Nadal has re-emerged at the highest level after an injury layoff. Like Federer, Nadal has won two Grand Slam singles titles this year.

For: Nadal beats Anderson and wins US Open for his 16th Grand Slam