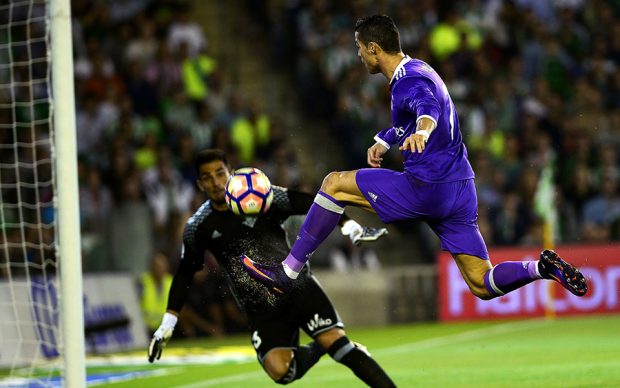 Zinedine Zidane’s men were always in control in Seville, as the ex-Malaga netted twice and Cristiano Ronaldo rounded off the scoring in a fine performance

Real Madrid ended a run of four matches without a win in sensational fashion on Saturday as they obliterated Real Betis 6-1 in LaLiga to make a mockery of their supposed injury crisis.

Zinedine Zidane was without a number of first-team regulars including Luka Modric, Casemiro and Sergio Ramos, but his side put on a show in Seville and raced into a 4-0 lead before half-time on their way to a first victory in all competitions since September 18.

Toni Kroos was instrumental in crafting the first two, teeing up Raphael Varane early on and then Karim Benzema as Madrid took charge.

Marcelo effectively ended the match as a contest with his controversial third, finding the net despite appearing to be just offside, before Isco finished a scintillating counterattack on the stroke of half-time.

Betis improved immeasurably after the break and found the net early on through Alvaro Cejudo, but Isco’s delightful second after 62 minutes killed off any hope of a miraculous comeback with the 100th goal of Zidane’s reign.

Madrid continued their search for goals and Ronaldo finally got in on the act 12 minutes from time, wrapping up a comprehensive victory and sending them into Tuesday’s Champions League clash with Legia Warsaw in fine fettle by pulling level with Liga leaders Atletico.

Madrid’s injury worries looked to be a distant though when they got off to a brilliant start in Seville, as Varane turned in Kroos’ free-kick delivery with a good header in only the fourth minute.

Both Ronaldo and Gareth Bale missed glorious chances for a second, but it did eventually arrive just after the half-hour mark.

Kroos robbed Joaquin in midfield, leaving Betis outnumbered at the back and the German coolly fed Benzema, who beat Antonio Adan at his near post.

And Madrid seemingly wrapped things up six minutes before the break – the brilliant Marcelo scuffing a finish into the ground that fortuitously looped over Adan after Benzema’s initial effort deflected into the Brazilian’s path.