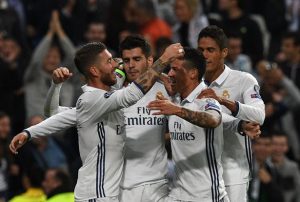 There was a lot of talk about never-give-up attitude and fighting until the end at the Estadio Santiago Bernabeu on Wednesday night, after late goals from Cristiano Ronaldo and Alvaro Morata gave Real Madrid a last-gasp 2-1 Champions League group-stage win over a desperately unlucky Sporting Lisbon team.

“We are Madrid. We know that every game will be difficult,” said Real Madrid coach Zinedine Zidane after the Group F opener for both teams. “But we also know that in any moment we can make the difference. In a game like today, when it seems it will be difficult, we get the three points. I stick with that — it makes me smile and be relaxed. We cannot win every game 5-0. That does not exist. Today we suffered, but we got the win.”

Zidane even suggested that fans at the Bernabeu actually prefer to suffer during a game like this that goes down to the wire, rather than the straightforward stroll to victory they often see.

“The fans like it this way,” he said. “Sometimes they go home and say it was just an easy win. I don’t know if you can say it was a fair result or not. But we knew we could always do something. We showed character, and the effort was tremendous from them all, and they got their reward.”

Morata, the locally born Madrid youth product, scored his first big goal since returning to the Bernabeu in the summer. After his goal in stoppage time broke a 1-1 deadlock, he spoke after the game about how unlikely comebacks tend to happen for his team.

“We didn’t start the game well, but this is Madrid, and at this club and in this stadium anything can happen,” Morata said. “Sometimes football is not fair. Today it was not fair, but it was fundamental to win and we did that.”