South America’s qualifiers: Brazil at the top, Argentina near the bottom 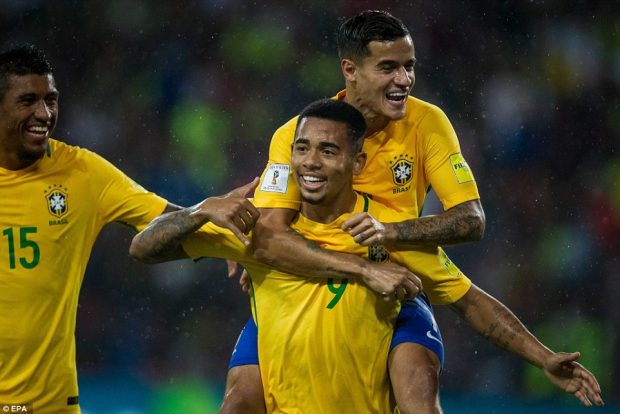 South America’s World Cup qualifying table is back where it was a week ago, with seven teams chasing four-and-a-half slots (the side finishing fifth will meet the winners of Oceania in a playoff).

Last Thursday’s ninth round had opened up a gap between the top five and the rest. But like a concertina, it has now closed back again. Three of the top five (Uruguay, Ecuador and Colombia) drew their games in round number 10. There was one winner, Brazil, who take over at the top, and one loser, Argentina, beaten at home by Paraguay. And Chile also won, so they and Paraguay are both breathing down the neck of Argentina, who now find themselves still in fifth position but much less comfortably so.

During the qualification campaign for the last World Cup, then-Argentina coach Alejandro Sabella confessed that there were times that his team were under attack when all he could do was close his eyes and pray for the best. It was a very open side, which ran such risks because up front they had Lionel Messi, Gonzalo Higuain and Sergio Aguero all firing together in a front three, with Angel Di Maria as part of the midfield trio.

New coach Edgardo Bauza could be forgiven now for praying when the ball is at both ends of the field. Argentina, with a 100 percent record in the three games Messi has played in this campaign, have now won just once in the seven matches he has missed. Without him, and with no time to work with his players on the training ground, Bauza looks lost. He ended up filling his side with centre-forwards and hoping that aimless crosses would somehow bring about an equaliser.

Paulo Dybala and Argentina were held to a frustrating 2-2 draw by Paraguay on Tuesday.

In truth, Argentina have seldom looked entirely convincing in recent years, even with Messi. There have been plenty of attempts to recreate the 4-3-3 of Barcelona, which flounder for lack of centre-backs with pace and quality. The defensive line can drop deeper, Messi has more ground to cover and he tends to burn himself out during tournaments.

But in Messi’s absence, there seems to be no clear idea at all. And, as recent games have shown, the defensive unit remains a problem. When Paraguay launched a rapid counterattack to take an early lead, there was a lack of coordination at the back — hardly surprising with a patched-up defence.

Three of the first-choice back four were missing through suspension. Martin Demichelis and Mateo Musacchio were central defensive partners for the first time, and there was too much space available when Javier Mascherano was turned by Angel Romero on the halfway line. Left-back Marcos Rojo was caught upfield, Musacchio found himself in no-man’s land and Demichelis could not get across quick enough to stop Derlis Gonzalez firing in at the near post.

This one move was sufficient to win the game. Argentina could never get an effective circuit of passing going, and when fortune smiled on them and they won a penalty, an out-of-sorts Aguero had his weak shot saved by Justo Villar.

Gabriel Jesus scored his fourth goal in four appearances since being promoted to Brazil’s senior team in Tuesday’s 2-0 win over Venezuela.

This was Argentina’s second home defeat of the campaign. Perhaps surprisingly, though, they have the best away record in the field, although that will be sorely tested next month when they visit a resurgent Brazil, who, in four victorious rounds under new coach Tite have climbed from sixth to top of the table.

The latest win, 2-0 in Venezuela, provides an interesting comparison with Argentina. Bauza’s side visited Merida last month, when they had to grit their teeth and ride their luck to salvage a 2-2 draw. The Venezuelan front pairing of Salomon Rondon and Josef Martinez are a genuine handful, and had their moments against Brazil as well. But Tite’s side were always in control, and the result was never really in doubt from the ninth minute when Gabriel Jesus gave Brazil the lead.

The teenage striker was one of Tite’s gambles. Gabriel Jesus had started the Olympic campaign at centre-forward, where he was very poor for the first two games before being switched to the left wing. But promoted to the senior side and handed the No. 9 shirt, he has responded with four goals in four games. The latest was inspired; some hard running to intercept a kick out from Venezuela keeper Dani Hernandez followed by a sublime chip, the sign of a player full of confidence. He is still very raw, prone to running offside, but his pace forces the opposing defence back and sets up space for Renato Augusto to direct Brazil’s passing game.

In driven rain on a poor, heavy pitch in Merida, Brazil cruised to a low-key victory with none of the desperation that had been on show in Argentina’s scrambled 2-2 draw. Brazil are looking like a team, while Argentina are looking anything but. Bauza has plenty to worry about as the two great rivals build toward next month’s meeting in Belo Horizonte. He might want to start by praying for Messi’s fitness.

For: South America’s qualifiers: Brazil at the top, Argentina near the bottom