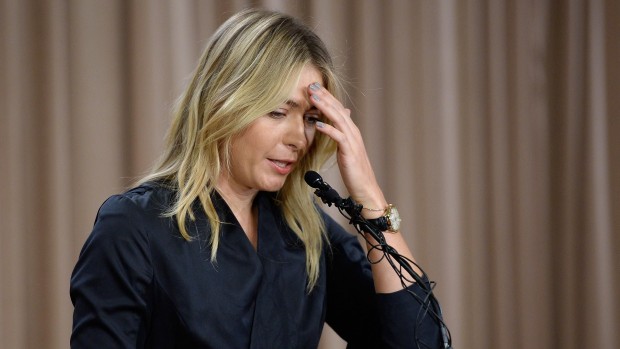 Maria Sharapova has revealed she failed a drugs test at the Australian Open in January – and fears for her future in the sport.

The Russian said she had been taking the banned substance meldonium – which was given to her by a family doctor – over the past 10 years before it was put on WADA’s (Word Anti-Doping Agency) banned list.

She has been provisionally suspended by the ITF from March 12, though the length of the ban has yet to be announced with the case still to be concluded. However, media commentators are speculating it could be at least a year.

“I don’t want to end my career this way and I really hope I will be given another chance to play this game,” said the Russian five-times Grand Slam winner in addressing a press conference in Los Angeles.

“What I put in my body is my responsibility. This is new to me.

“I made a huge mistake.

“I have let my fans down, and let the sport down that I have been playing since the age of four that I love so deeply.”

“I received a letter on 22 December from WADA for the changes next year and where the tests will be with a link to the changes for 2016, and I did not look at that list.

Amid fielding questions from gathered media, Sharapova said: “It is very important for you to understand that for 10 years this medicine was not on WADA’s banned list and I had been legally taking that medicine for the past 10 years.

“But on 1 January the rules had changed and meldonium became a prohibited substance, which I had not known.”

Sharapova is one of 10 women to complete the career Grand Slam in tennis winning the Australian Open, French Open, Wimbledon and the US Open. The former world number one is ranked seventh in the world.

She is the richest sportswoman in the world and earnt £21 million last year according to Forbes, with her business interests and endorsements earning her fame and fortune beyond tennis.

But she has played in only three tournaments over the past eight months due to problems with her right arm and shoulder. She needed shoulder surgery in 2013.

At the age of 28, she is not retiring from the sport – as had been rumoured before her announcement – despite being plagued by injury.

She reached the quarter-finals of the Australian Open in January, but lost in straight sets to Serena Williams. It was on that day – January 26 – that she provided the positive sample.

The Serbian player Viktor Troicki was banned for 18 months in July 2013 for failing to provide a blood sample in a tournament in Monte Carlo.

It was reduced on appeal to one year with Troicki returning in July 2014.

What do we know about meldonium?

Why was Sharapova using it?

Sharapova admitted in her news conference that she has a family history of diabetes and had been taking the drug as part of her medication to combat it – as well as some irregular EKGs (electrocardiogram which checks the electrical activity of the heart) – since 2006. It was outlawed in January, but Sharapova missed the email from WADA informing her of the changes.