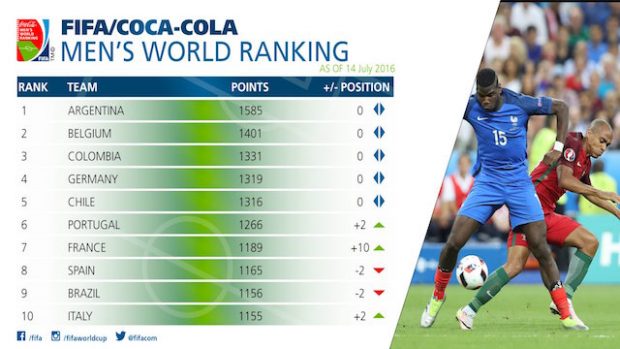 Wales have moved above England and up to 11th in the Fifa world rankings after their run to the semi-finals of Euro 2016.

Chris Coleman’s men have jumped 15 places and are two above managerless England, who dropped two spots after losing to Iceland in the last 16.

Northern Ireland fell two spots to 28th despite an impressive Euros campaign, while Scotland fell to 50th after failing to qualify. Republic of Ireland moved up to 31st.

Martin O’Neill’s side beat Italy during the tournament before losing to France in the last 16.

Wales’ campaign was their best performance at a major international tournament, although they actually reached a higher position in the rankings – eighth – in October 2015, as they edged closer to Euro 2016 qualification.

Fellow Euro 2016 surprise package Iceland rise to their highest ranking after reaching the quarter-finals of Euro 2016, moving up 12 places to 22nd.

The top five teams remained the same, with Argentina ranked first ahead of Belgium, Colombia, Germany and Chile.

Euro 2016 winners Portugal and defeated finalists France moved up two and 10 places respectively to sit sixth and seventh, with Spain, Brazil and Italy rounding off the top 10.

For: Wales ranked above England in new FIFA rankings, Argentina remains on top