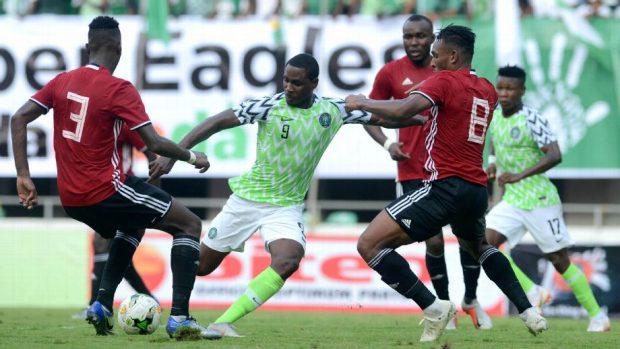 Odion Ighalo scored twice – including an 81st-minute winner – as Nigeria overcame Libya’s comeback to win 3-2 in North Africa and move into pole position in their Africa Cup of Nations qualifying group.

The Super Eagles took an early two-goal lead in Sfax following goals from Ighalo and Ahmed Musa inside the first 17 minutes.

Libya battled back and leveled after strikes from Mohamed Zubya in the 35th minute and Ahmad Benali’s 74th-minute equaliser.

However, they were undone in the 81st minute when Ighalo – who had scored a hat-trick in the first match between the two sides in Uyo on Saturday – kept his cool to bag a winner.

Nigeria’s third consecutive Group E win gives them a one-point lead at the top of the table, as they replaced South Africa following Bafana Bafana’s disappointing goalless draw in the Seychelles earlier in the day.

Libya holds Morocco to 1-1 draw in a friendly match