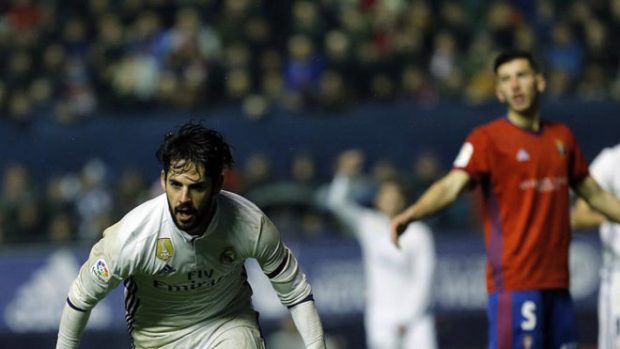 A second-half goal from Isco helped push Real Madrid past Osasuna 3-1 and back into first place in La Liga on a rainy Saturday night at the Estadio El Sadar in Pamplona.Cristiano Ronaldo gave Los Blancos a first-half lead, but Osasuna’s Sergio Leon answered before Isco’s fine strike and a late goal from Lucas Vazquez handed the three points to the visitors, who are once again atop the La Liga table with 49 points, one ahead of Barcelona and with two games in hand.

While it wasn’t Real’s best effort, it was the type of grind-it-out win necessary to win a league title, as the pitch and weather conditions in Pamplona made for tough sledding. Isco was among the standout players for Real, while forward Sergio Leon delivered a very good performance for the home side.

Both Marcelo and Luka Modric returned to the Real starting XI following their injuries, as manager Zinedine Zidane opted for a 5-3-2 formation for just the second time this season, as Raphael Varane, Sergio Ramos and Nacho played as centre-backs, while the aforementioned Brazilian and Danilo lined up as the wing-backs.

Toni Kroos’ suspension meant that Isco enjoyed a first league start since December, joining Modric and Casemiro in midfield.The early going was marred by a gruesome injury to Tano, whose leg was broken after a hard collision with Isco and had to be stretchered off. The injury to the Osasuna defender evoked images of the awful ankle injury suffered by Barcelona’s Aleix Vidal earlier in the day.

Ronaldo had done very little through the first part of the half, but the Portuguese needs just a touch to get going, and that’s what the Real talisman did to give the guests a 1-0 lead. Karim Benzema played in a perfect ball to Ronaldo, who knifed through Osasuna defenders Nikola Vujadin and Fuentes before firing in past Osasuna goalkeeper Salvatore Sirigu. For Ronaldo, it was his 12th goal in as many matches against Osasuna.

Real looked like they would strike right back minutes later but Benzema was denied by Sirigu from point-blank range on what was a spectacular save by the Italian stopper. On the other side of half-time, Navas got a chance to make a great stop himself, soarimng to his right to block a curling Sergio Leon left-footer.The injury bug would then strike Real, as Danilo had to be stretchered off as well and was replaced by James.But Real continued their hunt for a go-ahead goal and it would come shortly after the hour-mark thanks in part to a defensive lapse from Osasuna.

Substitute Carlos Clerc tried to close down on a pass for Benzema, but the Frenchman got to the bar first and eluded the Osasuna defender. Benzema was never able to get a shot off, but Isco was there to pounce on a loose ball, move to his right and fire back across goal to beat Sirigu and give Real the 2-1 lead.

Real then looked to put the match on ice with a third goal and Ronaldo was on the verge of doing so, but Sirigu’s kick save prevented the goal. Ramos got loose on the ensuing corner kick and had a good look at goal, but headed wide. There was also a penalty shout from Ronaldo after some contact with Oier in the area, but the referee correctly whistled for play to continue.

Heading into the final 10 minutes Real looked closer to scoring a third than Osasuna finding an equaliser, but Zidane’s men still had to contend with the excellent Sergio Leon, whose stinging long-range effort almost surprised Navas.Substitute Lucas Vazquez would then polish things off with a goal in the match’s waning second by taking a pass from Marcelo – with some help from a Ronaldo dummy – and chipping over Sirigu to give Real the 3-1 final scoreline.Real return to action in the Champions League on Wednesday when they host Napoli in the first leg of the Round of 16.