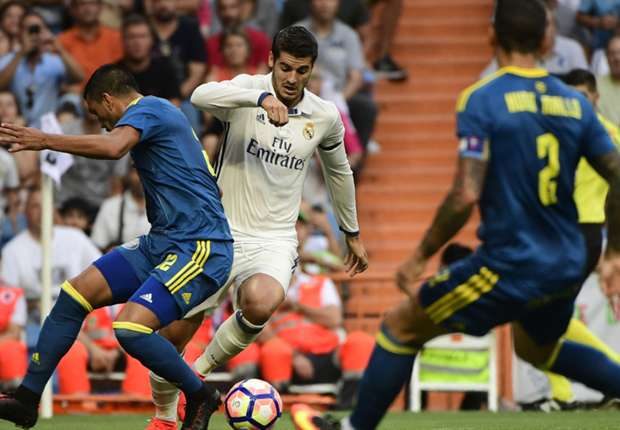 A fine late strike by Toni Kroos gave Real Madrid a slender victory over Celta Vigo, as Alvaro Morata got off the mark following his return to the Bernabeu.

Spanish champions Real Madrid were still without Cristiano Ronaldo, Karim Benzema and Isco, and they struggled to create chances against a well-drilled Celta Vigo side.

The first opening was eventually crafted by Luka Modric, the best player in the first half, whose run and shot cannoned back off the bar.

Real Madrid upped the tempo after the break and Gareth Bale also brushed the bar, this time with a free-kick that goalkeeper Sergio brushed onto the top of the frame.

Los Blancos eventually made the breakthrough just after the hour when Alvaro Morata pounced on a rebound after Sergio had put his team in trouble with a poor clearance.

But just as Real seemed to have control of the contest, a lapse in concentration at the back by Sergio Ramos allowed Orellana the space to find the bottom corner from 25 yards, setting up a big finale.

Morata thought he’d put his side back in front when his shot rebounded off the post, before Kroos found the net with an assured finish from the edge of the box, punishing a huge missed opportunity moments before for Celta Vigo, who spurned a three-on-one chance on the counter-attack.

James Rodriguez, a second-half substitute, was lively when he came on, and should have been awarded a penalty when he was tripped in the box – but it mattered for little in the end as Zinedine Zidane’s side, as unconvincing as they were, took the points.