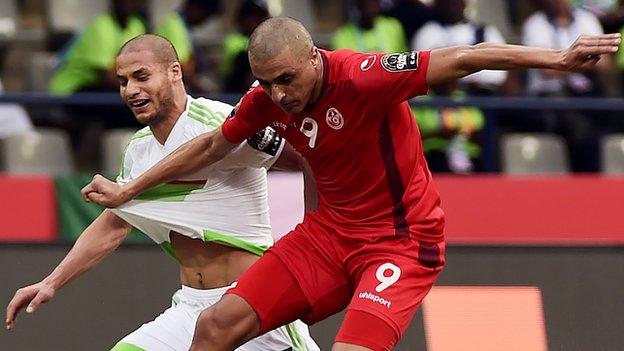 Kickoff – Burkina Faso booked a semifinal place at the African Nations Cup finals with a 2-0 victory over Tunisia in Libreville on Saturday.

The introduction of former Chippa United forward Aristide Bance late in the game swung the momentum in favour of the Burkinabe as he opened the scoring and Prejuce Nakoulma added a breakaway second.

After a physical cagey opening, the first real chance fell to Tunisia’s Yassine Khenissi, but he put his header over the bar.

Burkina Faso came close on 22 minutes when Nakoulma created a chance for Bertrand Traore, whose chip to the far side of the goal struck the top of the crossbar.

Tunisia went close themselves just past the half-hour mark when midfielder Mohamed Ben Amor received the ball 30-yards out and saw his shot whistle just wide.

The game meandered along until the 80th minute when substitute Bance drilled home a free-kick, low and hard into the bottom corner.

Tunisia will feel aggrieved with the free-kick decision as the ball appeared to strike the Tunisian defender’s chest and not his arm, but referee Daniel Bennett thought differently.

Bance almost grabbed a second soon afterwards later when his shot hit the post and Nakoulma saw his shot from the rebound cleared off the line.

It was 2-0 moments later when Tunisia’s corner was cleared and Nakoulma raced clear. Tunisia keeper Aymen Mathlouthi met him just before the halfway line, but the Burkina Faso forward rounded him and passed the ball into an empty net.

For: Tunisia leaves AFCON 2017 after losing against Burkina Faso 2-0